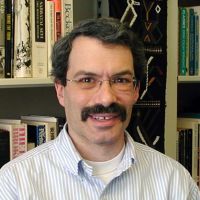 The tone of a written passage can fully influence how it is comprehended.

Dr. Richard Lachmann, a political sociologist at The University at Albany (SUNY), is studying the shifting tonality of textbooks especially in their treatment of war.

Richard Lachmann (Ph.D. Harvard 1983) is professor of sociology at the University at Albany, State University of New York. His book, Capitalists In Spite of Themselves: Elite Conflict and Economic Transitions in Early Modern Europe (Oxford, 2000) received the 2003 American Sociological Association’s Distinguished Scholarly Publication Award. He is the author of States and Power (Polity 2010). He currently is writing a book entitled First Class Passengers on a Sinking Ship: Elite Privilege and the Decline of Great Powers, 1492-2012 which examines the decline of dominant economic and military powers in early modern Europe and the contemporary United States. He also is researching media coverage of war deaths in the United States and Israel from the 1960s to the present.

The Tonality of Textbooks

Wars are central to the history of this country as presented in high school textbooks.

For a long time, textbook authors saw their task as inculcating patriotism as much as presenting historical facts.

My collaborator Lacy Mitchel and I read high school textbooks published from 1970 to the present to see what sorts of words and pictures they used to describe World War II and The Vietnam War. We found a significant change over those decades.

In the 1970s, both wars were presented as heroic and little attention was given to American casualties. Wars were discussed in terms of strategy and the outcomes of battles while the experiences of individual soldiers were largely ignored.

Textbooks presentations of both wars were transformed in the following decades.

There are increasing mentions of death, photos of dead and injured soldiers, and discussions and exercises that focus on the human costs of war. This is especially so for the textbooks’ Vietnam coverage. The photos of American soldiers in Vietnam have become increasingly graphic. Soldiers are quoted directly for both wars and their words convey their own suffering and trauma. Vietnam also stands out from World War II in that coverage of the Vietnam Veterans Memorial and veterans’ issues became a key theme after the opening of the Memorial in 1982. However, U.S. textbooks still have almost nothing to say about the suffering and deaths of non-Americans. It is possible to read twenty-first century high school textbooks and think that only Americans die in wars.

Our research of textbooks’ changing presentation of both wars suggests that the Vietnam War soured Americans on all wars, not just Vietnam, and that the antiwar movement, even though it still gets little attention in textbooks, made uncritical patriotism less acceptable in textbooks.

In the future, it will be interesting to study how textbooks will treat American military involvement in our contemporary conflicts.