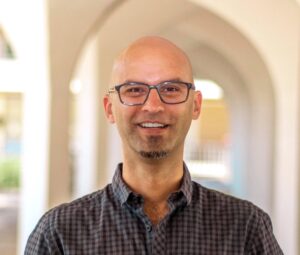 Computers use a big chunk of the world’s energy.

Alex Frano, assistant professor of physics at the University of California, San Diego, uses the human brain as inspiration for the next wave of technology.

Alex Frañó is Assistant Professor at the University of California, San Diego. He obtained his Bachelor’s degree in Physics from the National University of Honduras in Tegucigalpa. Then, after playing in an alternative rock band in Mexico City and other places, he returned to Physics to work on his Master’s degree at the University of Stuttgart. He did his PhD research with Prof. Bernhard Keimer the Max Planck Institute for Solid State Research stationed at the synchrotron facility in Berlin. He won the Ernst-Eckhard-Koch Prize and the Springer Outstanding PhD Research Prize. He was later awarded the University of California (UC) Presidential Postdoctoral Fellowship to work at UC Berkeley with emeritus Chancellor Robert Birgeneau. Now he is an Assistant Professor and he has recently won the Sloan Research Award 2020. He is also the Assistant Director of an “Energy Frontier Research Center” funded by the Department of Energy to study “Quantum Materials for Energy Efficient Neuromorphic Computing”; with the goal of developing a new materials’ platform for a computing paradigm inspired by the brain. His other research interests include strongly correlated electron systems, design and growth of transition-metal oxide heterostructures, and various forms of x-ray scattering tools to probe their properties.

Today round 10% of the world’s energy is used for computation.  This use is doubling each decade.  We need new types of computers that work far more efficiently than the ones we use today.  Let’s look to the human brain for inspiration.

Our brains perform complex tasks like recognizing a familiar face in a crowd or a song tune from just a few notes all while consuming just a fraction of the energy used to power a light bulb. Supercomputers, which require thousands of times the energy of our brain can’t perform these tasks as well as our brains.

If it were possible to build a computer as powerful as the brain today, it would generate so much heat that it would probably melt.  A solution is to build a computer from hardware that functions like the brain’s synapses, neurons, axons, and dendrites. Such neuromorphic computers already exist, but they are far far less energy efficient than the brain.

To achieve brain like efficiency, computers based on quantum materials are showing promise. These new materials take advantage of the physics that controls the behavior of elections. Achieving energy efficient neuromorphic computing is the goal of some of the innovative scientists and engineers.