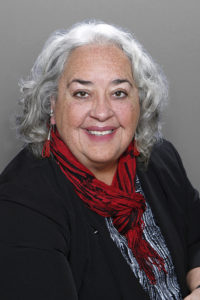 On University of Texas at El Paso Week: We’ve seen the effects of family separation at the southern border.

Dr. Yolanda Chávez Leyva is a Chicana historian and writer who was born and raised on the border. She is the director of the Institute of Oral History and associate professor at UTEP. She has spent her life listening to and now documenting the lives of people who live on la frontera. Dr. Leyva specializes in border history, public history, and Chicana history. She is co-founder of Museo Urbano, a museum of the streets, that highlights fronterizo history by taking it where people are– from museums to the actual streets of El Paso. She came to academia after a decade of social work in the Black and Brown communities of east Austin, with a desire to make academia and especially history relevant and useful to people. Her work has been recognized nationally. She is the recipient of the National Council on Public History “Best Public History Project Award” and the American Historical Association Herbert Feis Award that recognizes “distinguished contributions to public history.” She has curated, and co-curated, many museums exhibits with her students. Dr. Leyva has published numerous articles on Chicana, lesbian and border history. In addition, she has published poetry in Ixhua, La Voz de Esperanza, andCantos al Sexto Sol.

In recent months, thousands of Central American refugees have entered the United States seeking asylum and fleeing increasing violence and poverty in their homelands. Among these thousands are children – who accompany their parents or other relatives, and older children who cross the border by themselves.

We have seen the images of children crying, teenagers walking in straight lines amid large white tents, and listened to the news reports. However, we have rarely heard from the children.

Our exhibition titled, Uncaged Art: Tornillo Children’s Detention Camp, is providing a window into the personal world of migrant children. These art pieces, along with the public’s reaction and attention, are providing me with an opportunity to explore how we think about ethics. My research evaluates how individuals deal with trauma and suffering, and how to successfully tell a story that has already been mediated through mainstream media.

The University’s Centennial Museum is displaying 29 salvaged pieces of art, out of 400 pieces, created by migrant children once held in a secured tent city in Tornillo, TX. Due to the security associated with the highly politicized shelter, first-hand knowledge of the children’s daily routines and experiences remains undisclosed.

A 17-year old from Honduras who had been at Tornillo for two and half months visited the exhibit. He told us, “Behind every painting is a child desperate to be free.” He reminded us how children, who psychologists have characterized as traumatized, could also produce such beauty.