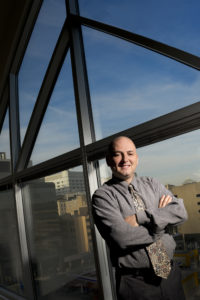 Does being addicted to social media make you more depressed?

Dr. Brian Primack combines his expertise in education, technology, human development and medicine in his research on the effect of mass media messages on health. Specifically, he focuses on the use of media literacy education to prevent adolescent smoking, underage drinking and other harmful adolescent behaviors.

Dr. Primack has authored studies on topics such as racial disparities in tobacco advertising, the portrayal of substance use in popular music and  the relationship between “media literacy” and adolescent smoking. He has been quoted in the New York Times, ABC News, CBS News and Forbes Magazine.

Dr. Primack received his medical degree from Emory Medical School and his master’s in education degree from Harvard University.  He graduated from Yale University in 1991 with degrees in English literature and mathematics.

There has been a lot of controversy about the relationship between social media use and depression. On the one hand, maybe using more social media can help people reach out to others in difficult times, alleviating depression. On the other hand, maybe spending more time pouring through others’ idealized photo collections and achievements can lead to negative self-comparisons. This question is important not only because depression is a leading cause of worldwide morbidity but also because social media is now so ubiquitous.

So, in 2014 we surveyed a nationally-representative sample of 1787 U.S. young adults ages 19 through 32 on their overall social media use and depression using items adapted from the Pew Internet questionnaire. We measured depression using the validated Patient-Reported Outcomes Measurement Information System (PROMIS) scale.

Because this was a cross-sectional study, it does not disentangle cause and effect.  It may be that people who already are depressed are turning to social media to fill a void. Alternatively, exposure to highly idealized representations of peers on social media may elicit feelings of envy and the distorted belief that others lead happier, more successful lives. Another possibility is that engaging in activities of little meaning on social media may give a feeling of “time wasted” that negatively influences mood.

The purpose of this is certainly not to advocate forgoing social media altogether. Social media, like many other technologies, represents a double-edged sword, with many potential positive uses. Instead, we hope to help people use this medium for improving life and not inadvertently detracting from it.