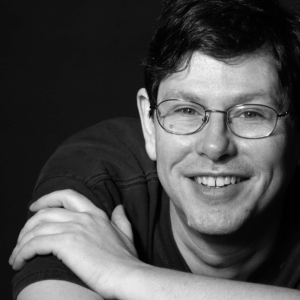 To beat cancer, we may want to start thinking small.

Andrew Ellington, professor in the department of molecular biosciences at the University of Texas at Austin, explains how microscopic machines may be the key to defeating this disease.

Andy Ellington uses evolutionary techniques — in particular, a method known as “directed evolution” — to engineer biopolymers, cells, and even entire organisms that can help solve real-world problems, including diagnosing and monitoring disease, creating new biosynthetic pathways for drugs, and even making novel ‘matter computers’ that may herald a revolution in ‘smart objects.’ He also leads a project called DIY Diagnostics, which marshals a team of undergraduate researchers to develop fast, inexpensive environmental sensors for mosquito-borne viruses such as malaria and Zika.

Imagine one day you could build machines so small and powerful that they could roam the human body looking for cancer cells and then destroy them without harming healthy cells. This is just one of many possible medical applications of nanomachines that my colleagues and I are hoping to make possible. 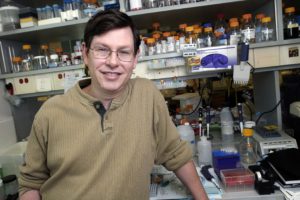 Portrait of Dr. Andy Ellington in the Department of Chemistry and Biochemistry for a feature story on infectious diseases. (Photo credit: Christina S. Murrey)

We recently took a step in that direction by creating a nanomachine that can randomly walk in any direction across a surface coated with DNA. The walker, which is much smaller than a human cell, is made from a single piece of DNA with two legs connected by a torso. Like a human, it moves by putting one leg forward, then lifting the other leg and putting it forward. The walker autonomously and randomly decides where to put its leg on each step. 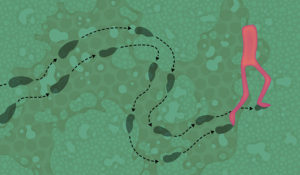 Researchers have developed a nanoscale machine made of DNA that can randomly walk in any direction across bumpy surfaces. Illustration credit: Jenna Luecke.

This isn’t the first walking nanomachine, but the others were mostly preprogrammed to follow a specific path. Our DNA walker moves randomly, which is just what you would need in a machine that is scouting for a veritable needle in a haystack, such as a small clump of cancer cells hiding among billions of healthy body cells. To be of practical use in the human body, doctors might have to inject many such nanomachines, perhaps hundreds or thousands.  Indeed, one can imagine the nanomachines working together in a swarm, coordinating their actions to accomplish a task.

Another interesting aspect of making DNA nanomachines is that they make decisions, and these decisions amount to a computation, similar to what an electronic computer might make. The decisions that a DNA walker makes at the nanoscale could allow us to one day diagnose, then treat cancer; control blood glucose levels in diabetics; and decide what cells to repair in patients with anemia or heart disease.