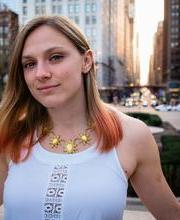 On this Student Spotlight: Can you learn while sleeping?

Sadie Witkowski, PhD candidate in the department of Brain, Behavior and Cognition at Northwestern University, delves into whether our brains are still working while we doze.

Sadie is in her third year of graduate school at Northwestern University in the Brain Behavior and Cognition area of the Psychology department. Her research focuses on sleep and memory – particularly how memories can be strengthened during sleep. In her spare time, she has started a podcast called PhDrinking in which she interviews grad students about their research for a non-peer audience.

My lab studies the process of memory consolidation, or how you take all the information you learned throughout the day and decide which information your brain wants to keep and which to toss.

We study memory consolidation through a game-like spatial memory task. We use a grid and place items in different positions on the grid, one after another. Thus, participants might see a dog in the upper right hand of the grid and hear a “bark” sound or they might see a wine glass in the lower left corner and hear the clink of people “cheers”ing.

Every item our participants learn is linked with a specific sound cue. Once they learn the locations of all these items, we give our participants 90 minutes to take a nap in the lab. During this nap, we watch their brain waves and wait until they are in their deepest stage of sleep, called slow wave sleep. During this period, we play half of the sounds they heard while learning the locations of the different items. These sound cues don’t wake them up, nor do they have any memory of the sounds playing. But their brain is actually taking in that sound and processing its associated information. So when they wake up from their nap and we have them do the test all over again, they’re actually better at the items they heard while asleep than the ones they didn’t hear.

For example, they would be better at the dog than the wine glass if we played the “bark” during sleep. We call this entire process Targeted Memory Reactivation, or TMR for short. We’re taking a memory and targeting it and telling the brain you should reactivate this memory trace and make it stronger. Using TMR, we’ve started to explore the boundaries of what the brain can rehearse during sleep. It’s still a very new area of research, ripe for exciting new discoveries on memory, the nature of sleep, and potentially even interesting new treatments.