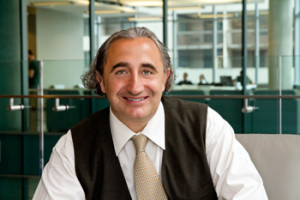 We’re all consumers in one way or another.

Gad Saad, professor of marketing at Concordia University, taps in to the biological origins of our consumerist nature.

Dr. Gad Saad is Professor of Marketing, holder of the Concordia University Research Chair in Evolutionary Behavioral Sciences and Darwinian Consumption, Associate Editor of the journals Evolutionary Psychology and Customer Needs and Solutions, and an advisory fellow at the Center for Inquiry (Canada). He has held Visiting Associate Professorships at Cornell University (Johnson Graduate School of Management), Dartmouth College (Tuck School of Business), and the University of California-Irvine (Graduate School of Management). Dr. Saad was inducted into the Who’s Who of Canadian Business in 2002, and was listed as one of the “hot” professors of Concordia University in both the 2001 and 2002 Maclean‘s reports on Canadian universities. He received the Faculty of Commerce’s Distinguished Teaching Award in June 2000.

He has authored 75+ scientific articles in numerous disciplines including in marketing, consumer behavior, advertising, psychology, medicine, economics, and bibliometrics. Professor Saad’s trade book, The Consuming Instinct: What Juicy Burgers, Ferraris, Pornography, and Gift Giving Reveal About Human Nature (Prometheus Books), was released in June 2011. His 2007 book The Evolutionary Bases of Consumption (Lawrence Erlbaum) is the first academic book to demonstrate the Darwinian roots of a wide range of consumption phenomena.  His edited book, Evolutionary Psychology in the Business Sciences (Springer), was released in 2011 as was his special issue on the futures of evolutionary psychology published in Futures (Elsevier).

Dr. Saad’s work has been covered in 400+ media outlets around the world including in television documentaries/interviews, radio interviews, podcasts, newspapers, magazines, and blogs.  Some of the print outlets include The Economist, Chatelaine, Men’s Health, The New York Times, Boston Globe, The Global and Mail (Canada), The Telegraph (UK), The Guardian (UK), Spiegel Online (Germany), The Scotsman (Scotland), De Pers (Netherlands), The Brisbane Times (Australia), and Gulf News (Middle East).  Based on extensive media coverage of his research, he has been appointed Newsmaker of the Week of Concordia University in five consecutive years (2011-2015).

Are consumers born or made? The truth is that we are an inextricable mix of our biology and environment. However, in the great majority of the social sciences, and in particular within the fields of consumer behavior and marketing, the role of evolution and our biological heritage has largely been ignored. Over the past 15+ years, I have sought to systematically Darwinize the study of our consummatory nature.

I argue that much of our consumer choices could be mapped onto four key Darwinian drives: 1) survival; 2) mating; 3) kin selection; and 4) reciprocal altruism. Our evolved gustatory preference for high-calorie foods is an instantiation of the survival module.

Three examples from my research stream might clarify some of these concepts. I’ve shown that men’s testosterone levels increase when they engage in an act of conspicuous consumption such as driving a Porsche. The Porsche in this case is akin to the peacock’s tail as it serves as an honest signal of a man’s likely social status. Switching to women, I’ve documented their greater proclivity to beautify themselves when in the ovulatory phase of their menstrual cycles.

Each of the latter examples would have been impossible to discover without the illuminating lens of evolutionary psychology. Homo consumericus, as I call it, is a product of the same evolutionary forces that shape all living organisms.