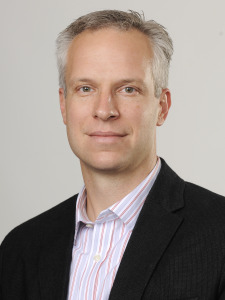 The animal kingdom is a frequent inspiration for engineers.

Dr. Alfred Crosby, a professor of polymer science at The University of Massachusetts Amherst, has helped to create a super-sticky adhesive modeled after the feet of a gecko.

Dr. Alfred Crosby is a materials scientist and engineer interested in the mechanics of soft materials and biological systems and the leader of the initial project that developed Geckskin™. He received his B.S. degree in Civil Engineering and Applied Mechanics at the University of Virginia in 1996 and his Ph.D. in Materials Science and Engineering at Northwestern University in 2000. In addition to Geckskin™, he leads a research group focused on learning and using lessons from nature to understand and design materials. His research on adhesion, wrinkling, cavitation, and nanoparticle assemblies has garnered international acclaim and numerous honors and awards. He has published more than 100 papers, has delivered well over 100 invited and plenary lectures, and has been highlighted extensively in the popular media. He holds several patents for the technologies that have evolved from his group’s research.

Duncan J Irschick is an integrative biologist and innovator interested in the evolution and ecology of animal athletics, and how biological form can inform synthetic design. His research on gecko adhesion, animal movement and biomimicry has garnered international acclaim and many honors and awards. He has received generous funding from NIH, NSF, and private foundations, and has received substantial media attention in books, newspapers, the Internet media and on television including the New York Times, the Wall Street Journal, CNET.org, CNN, the Discovery Channel, MSNBC.com, Bloomberg.com, and FOXNEWS.com.

For many years, biologists have not been the only scientists to be amazed by the power of gecko feet, which have the adhesive force to allow a five-ounce lizard to carry the equivalent of nine pounds up a wall without slipping.

Geckos are at home even on backward-tilting surfaces. They can apply their feet and disengage them with great ease, leaving nothing sticky behind. These properties have fascinated engineers, who have technical names for these adhesive feats: supporting heavy weight is known as “high capacity,” holding and easily releasing is called “reversibility,” and sticking with no residue is known as “dry adhesion.”

The fact that geckos can do all three is tantalizing to those who design adhesives. Over the past 20 years, several teams around the world have tried to mimic what the gecko can do. They want a synthetic high-capacity, reversible material that won’t leave a residue for use in everyday life and in medical and industrial applications. Until now, this combination of properties, at these scales, has never been achieved.

What made our approach successful is a more thorough analysis of the complex physical properties of the gecko’s foot. Previous efforts had focused almost exclusively on their microscopic toe bristles, called setae.

We looked beyond the setae and identified important aspects of the whole organism, particularly the skin and tendons, which proved crucial to understanding how they all work together to give geckos their amazing climbing abilities.

Our group’s key innovation was to create an integrated adhesive with a soft pad woven into a stiff fabric that allows the pad to “drape” over a surface to maximize contact. Also, as in natural gecko feet, the skin is woven into a synthetic “tendon,” which helps to maintain stiffness and rotational freedom. Our first Geckskin device was about the size of an index card and could generate a maximum force of a few hundred pounds on a smooth surface such as glass. It could be released with negligible effort and reused many times with no loss of effectiveness. It’s important that it uses relatively inexpensive, widely available polymer materials.

Since our first success, we’ve gone on to develop new versions of Geckskin that use only sustainable fabrics and materials such as hemp and cotton, and we’ve fine-tuned its ability to adhere to a wider variety of everyday surfaces such as wood, wallboard and plaster. Geckskin and its supporting theory demonstrate that setae are not required for gecko-like performance.

Ours is a concept that has not been considered in other design strategies and one that we expect to open up new research avenues in adhesion in the future.