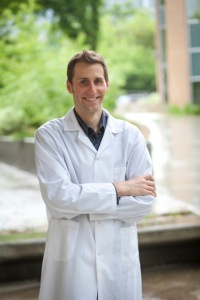 Microscopic pathogens are all around us, working to make us sick.

Dr. Joseph Rubin, a microbiologist at The University of Saskatchewan, is studying these bacterial superbugs and working to prevent a potentially deadly epidemic.

Dr. Joseph Rubin is an Assistant Professor in the Department of Veterinary Microbiology at the University of Saskatchewan in Saskatoon, Canada.
Dr. Rubin is interested in clinical infectious disease at the animal-human-food interface. He enjoys a diverse research portfolio encompassing organisms from humans, dogs, chickens, pigs, horses, wildlife and retail meat products. His research focuses on antimicrobial resistance surveillance, molecular epidemiology and the interspecies transmission of resistant organisms.

Introduced in the early 1940’s penicillin was the first antibiotic and arguably the most important medical advance of the 20th century. Unfortunately, as a result of the extraordinary evolutionary power of bacteria, resistance to this and other drugs was quick to develop.

Concern about the dissemination of antimicrobial resistance through the food supply led to the development of national resistance surveillance programs including NARMS, an FDA program established in 1996, and its Canadian counterpart CIPARS. Targeting retail meats among other things, these programs have done a good job of identifying and characterizing food-borne antimicrobial resistance. However, both programs are limited in scope to major agricultural species such beef, pork and poultry, and do not include other, niche market meat products. To address this gap in surveillance, we conducted a pilot study to look for resistant organisms in niche market products including squid, black sea cucumber and frog legs which were purchased from local markets in Saskatoon, Canada.

We were surprised to find a carbapenem resistant bacteria called Pseudomonas fluorescens in one of the squid tested. The carbapenems are a critically important type of antibiotic and our last line of defense against otherwise untreatable infections and so the emergence and dissemination of carbapenem resistance is public health emergency. Never before found in food, the carbapenemase enzyme produced by this organism indicates that this resistance may be more broadly disseminated than previously thought.

We are now working on a larger follow up study to determine if this organism was an anomaly or indicative of a wider problem.