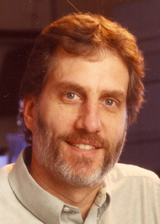 Chemists at Penn State University and Saudi Arabia’s King Abdullah University have discovered that small medical testers—things like glucose and ovulation sensors—could soon be powered by your own saliva. – Vocativ.com (4.22.2014)

This sounds like science fiction, but Bruce Logan, a biomedical engineer at PSU, is unlocking the power held in saliva.

Dr. Bruce Logan is the Kappe Professor of Environmental Engineering and the Evan Pugh Professor at Penn State University. The Logan Lab‘s main focus is the development of new microbial electrochemical technologies (METs) for achieving an energy sustainable water infrastructure. Logan and his collaborators have: invented a method for sustainable hydrogen production using microbial electrolysis cells (MECs), a method for water desalination that does not require electrical energy from the grid or high pressures called microbial desalination cells, reactors to harness salinity gradient energy in micorobial reverse electrodialysis cells (MRCs), and improved direct bioelectricity generation by several orders of magnitude in microbial fuel cells (MFCs). Other research has included the discovery of how large aggregates form in the ocean, called marine snow, that can help to sequester carbon to deep sediments; and molecular and nanoscale techniques to study particle dynamics and microbial adhesion in engineered and natural systems; microbial adhesion and transport.

Renewable and clean forms of energy are one of society’s greatest needs. Even more urgently, 2 billion people still lack adequate sanitation and the economic means to afford it. As an environmental engineer, I am always seeking new ways to redirect natural processes as economical and sustainable sources of power, particularly from water.

I have developed several methods for harnessing the energy given off when bacteria decomposes. Many liquids carrying bacteria are potential power sources. In previous research I demonstrated a process that cleans wastewater and removes most salt from seawater while also producing electricity.

Because 5 percent of the electricity produced in the United States is used for water and wastewater infrastructure — from pumping to treatment — microbial fuel cells can become sustainable power sources on a large scale, and can help reduce our carbon footprint and save money.

This energy can be captured in microbial fuel cells on a microscopic scale, too. It turns out that your mouth houses a great potential energy supply. Human saliva contains hundreds of species of bacteria. Powering miniature devices through contact with saliva has opened new uses of ultra-low-power electronic chips.

The biomedical field alone has many applications for tiny microbe-powered machines. For instance, a woman might be able to predict her ovulation by monitoring the conductivity of her saliva, which changes five days before ovulation occurs. That change in conductivity could trigger a response sent from a spit-powered chip and received wirelessly to a cell phone.