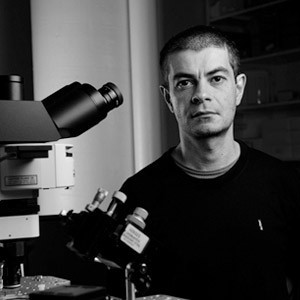 Dr. Ivan de Araujo, an associate professor of psychiatry at the Yale University School of Medicine, is analyzing the relationship our brain chemistry shares with the sugary snacks everyone loves.

A natural of São Paulo, Brazil, Ivan de Araújo attended the University of Brasilia, from where he received his BA (Philosophy) and MA (Mathematics) degrees. He went on to perform additional post-graduate work at the University of Edinburgh , where he studied neural network models of hippocampal function.

In 2003 he completed his doctorate in the laboratory of Edmund T. Rolls at Oxford University, where he studied human brain representations of taste-odor combinations, fat perception, and thirst. He came to the USA in 2004 to perform post-doctoral work in the laboratories of Sid Simon and Miguel Nicolelis at Duke University, where he studied the responses of neuronal populations to changes in physiological state in both rats and mice. He joined the Pierce Laboratory as an Assistant Fellow in June 2007 where he studies the neurobiology of feeding.

The so-called “artificial sweeteners” are substances that, while lacking calories, surpass sugars in their ability to stimulate sweet taste receptors of the oral cavity.

While we tend to attribute the rewarding effects of sugars to their sweetness, several lines of evidence indicate that these effects actually mainly arise from the energy sugars provide.

Taking the issue to the neuro-biological level, we identified a group of cells within the brain’s reward circuitry that are selectively responsive to sugars – that is, they are insensitive to the mere sweetness of low-calorie compounds.

These cells release the chemical messenger dopamine, which is essential for reacting appropriately during important events – including in rodents, humans and even flies.

We have found that glucose stimulates dopamine release at much higher levels than artificial sweeteners, but also that this effect is blocked when we prevent cells from using glucose molecules for energy production.

Hungry mice indeed showed a long-lasting lack of interest in consuming artificial sweeteners. These findings imply that brain cells within the reward circuitry are primarily sensitive to the energy contents of foods, and will rapidly induce behavioral changes whenever a delicacy does not provide for the energy requirements of the body.

Such an old, evolutionarily conserved mechanism may underlie our inflexible attraction towards high-calorie.