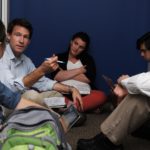 MAY 1, 2012 – Tom Mould, associate professor of sociology and anthropology, teaches in the video editing suites. (Photo by Kim Walker)

On Butler University Week: Stories can have a big impact on all areas of life.

Tom Mould, professor of anthropology and folklore, determines how stories can affect an important social issue.

Tom Mould teaches and conducts research in the areas of folklore, language and culture, American Indian studies, oral narrative, religious and sacred narrative, contemporary legend, identity, ethnography, genre, and performance theory. He is the author of the books Choctaw Prophecy: A Legacy of the Future (2003),Choctaw Tales (2004), Still, the Small Voice: Revelation, Personal Narrative and the Mormon Folk Tradition (2011) and the forthcoming Overthrowing the Queen: Telling Stories of Welfare in America (2020).

Before coming to Butler in 2019, he was the J.Earl Danieley Distinguished Professor of Anthropology and Folklore at Elon University where he taught for 18 years and served in various roles including Director of the Honors Program. and Chair of the Sociology and Anthropology Department.

Welfare and the American Dream

Why is welfare so stigmatized in the United States? My research suggests that stories share a hefty part of the blame. And not just any stories, but one of the most foundational stories of the United States: the American Dream.

But let’s start with the most recognizable story about welfare: the welfare queen.  As Josh Levin discusses in a new book titled “The Queen,” the original welfare queen was Linda Taylor, a career criminal guilty of terrible crimes that likely included kidnapping and murder. Welfare fraud was only drop in the bucket. What is clear is that Linda Taylor was no typical aid recipient.

But that’s not how Ronald Reagan told her story in 1964 when he hit the campaign trail. He highlighted only the government fraud. Through the story of the welfare queen, Ronald Reagan transformed all aid recipients into cheats.

How was he so successful? Structural analysis of the welfare queen narrative provides an answer. In the story, an unmarried woman with multiple children avoids work and yet is rewarded with housing, food, and an allowance that allow her to live a life of luxury. It is exactly the opposite of the American dream, where no work is countered with hard work, immorality with morality, dependence with independence, and single parenting with the model of the traditional family.

The parallels between these two stories is not an accident. While the American Dream narrative often traces its roots to Horatio Alger, the term “the American Dream” wasn’t coined until sixty years later. Writing in 1931 at the beginning of the Great Depression, James Adams was horrified by Roosevelt’s New Deal, convinced that it would strip Americans of their work ethic and dignity. The American Dream was the antidote.

Today, these two narratives continue to shape our views of welfare in the United States, virtually ensuring that welfare will continue to be stigmatized as antithetical to our national ethos.