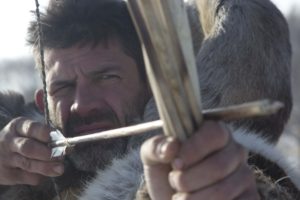 On Washington College Week: Did we eat healthier millions of years ago?

Bill Schindler, associate professor of anthropology at Washington College, discusses why today’s dietary culture is out of whack with our body’s needs.

Dr. Bill Schindler is the director of the Eastern Shore Food Lab and an Associate Professor of Anthropology and Archaeology at Washington College in Chestertown, Maryland.  As both an experimental archaeologist and primitive technologist, his research and teaching, both in and outside of the college, revolve around a comprehensive understanding of prehistoric technologies including lithic (stone tool) technologies, prehistoric ceramic technologies, projectile technologies, hunting, foraging, hide working, fiber technologies and all aspects of prehistoric food acquisition, processing, storage, and consumption.  He believes that the better understanding of prehistoric life made possible through the archaeological record and a practical understanding of the technologies that created it can contextualize our place in the world and help provide answers to many of the issues facing us today.  Bill is a strong advocate of traditional foodways and is constantly seeking new ways to incorporate lessons learned from his research into the diets of modern humans.  His outlook on food has revolutionized the way in which he and his family eat and he attributes much of the health his wife and three children enjoy to the hunted, gathered, and fermented foods that comprise a significant portion of their diets.  Bill recently co-starred in the 10-part National Geographic series, The Great Human Race and is currently spending his sabbatical leave conducting research and engaged in professional development as a part of the Food Evolutions project.

Reinventing Food Systems by Incorporating our Dietary Past

Approximately three-and-a-half million years ago, our Australopithecine ancestors created the first tool by striking together two rocks. They produced a razor-sharp edge that allowed them, for the first time, to effectively butcher scavenged animals on the African savannah. In an instant, this technological leap completely transformed our ancestors’ relationship with their environment. And, it initiated a cascade of innovations that would radically transform our diets over the next several million years.

Stone tools, followed by the development of fire, hunting, and food processing technologies such as fermentation, supported our growing bodies and brains. Our ancestors were able to obtain more nutrient-dense foods, and then to process them in ways that increased that nutritional powerhouse before the food even entered their mouths.

Today, our bodies, brain size and digestive tracts are essentially the same. But, our modern food systems and dietary culture are in direct opposition to that past. Instead of enhancing the density and accessibility of nutrients, today’s food processing methods and technologies operate at the expense of the nutrients in our food.  In fact, the contemporary food system has achieved the impossible – obesity and malnutrition in the same individual.

My research is focused on re-examining the food technologies of the past and linking them with modern culinary techniques to create a food system that fulfills our biological requirements, but also meets our modern expectations of flavor, texture, and presentation. By working with indigenous peoples, foragers, hunters, and modern food producers exploring alternatives like entomophagy—which means eating bugs as a sustainable, nutrient-dense food—we can relearn and rethink our current food systems. By looking to our ancestral past, we can ensure a healthier future and begin to eat like humans again.