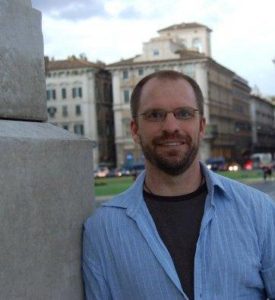 Another powerful empire might be falling right outside Rome.

Roger Thompson, Associate Professor of writing & rhetoric at Stony Brook University, discusses bears in the Appenine Mountains whose population is dwindling due to changing times.

Roger Thompson taught at the Virginia Military Institute for fourteen years, where he was Professor of English and fine arts.  His research bridges the traditional disciplinary gaps between rhetoric, literature, and writing studies, and he has worked under fellowship at Harvard University pursuing cross-disciplinary research.  He is Senior Fellow at the Institute for Veterans and Military Families at Syracuse University, is the co-recipient of a CCCC Research Initiative Grant, and was invited to the inaugural Dartmouth Summer Seminar for Composition Research.  He is an award-winning nonfiction writer, and his scholarship and nonfiction has appeared in numerous academic and non-academic journals.  His primary area of research is in the history of rhetoric with a particular emphasis on classical and nineteenth-century rhetoric, but his recent work includes extensive scholarship on veterans and the culture of war.  He is co-author of Beyond Duty: Life on the Frontline of Iraq, a bestselling Iraq War memoir that has been translated into several languages and was covered by major media outlets, including The New York Times, CNN, the CBC, and NPR.  He has an extensive background in undergraduate research, directing a cross-disciplinary, international environmental research program in Banff, Alberta, for a decade, and his teaching and mentorship was recognized by VMI with several awards and grants.  He is senior editor of Don’t Take Pictures magazine, a journal of fine art photography, and he has written extensively about outsider art with publications in Raw Vision and The Outsider. He received his PhD in Rhetoric and American Literature from Texas Christian University, and he received his BA and an MA in English from Baylor University.

The Last of the Italian Grizzlies

Only fifty miles from Rome, a remarkable group of wild brown bears cling to existence. The Marsican Brown Bear is sometimes called the “Italian Grizzly” and are unlike any other brown bears in the world. Almost exclusively vegetarians, with a distinctive cranial shape and unusual genetic markers, they have lived peacefully alongside people for millennia.

They roam the Apennine Mountains, primarily in Abruzzo National Park, just west of Rome. Known as Father Bear by the Abruzzese, locals often provided what they called “the Nature Tax.” If a shepherd had an apiary, he added an extra hive as a peace offering to the bear. If a farmer owned an apple grove, he planted additional trees at the perimeter of his land to allow the bear to feast. Instead of fighting the bear for the land, the Abruzzese simply decided to live with them, and the bears apparently rather agreed with this arrangement. In a thousand years of written history, no record exists of one attacking a human being.

Times, though, have changed. Over the last century, the Abruzzo economy has collapsed. Locals have fled, many immigrating to the U.S. Villages have been deserted and land has been abandoned. The population flight has provided opportunity for the bears to expand their range, and yet, they haven’t. Instead, their numbers have dwindled. Best estimates put their population at maybe 50 bears, with fewer than 15 breeding females. The cause is a complex mixture of global climate change, foreigners without a sense of the “nature tax” buying up land, and perhaps worst of all, the so-called agro-mafia who, gorging on agricultural subsidies, convert bear territory into cattle pasture. Without intervention, these bears—the last of their kind and a great example of human-beast co-habitation—will fade into history.