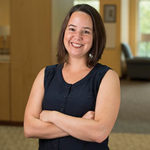 Ana Jimenez is an assistant professor of biology at Colgate University. Her research specialties include animal physiology, environmental physiology, and organismal biology. Jimenez is primarily interested in the functional linkages between whole animal metabolic rate and the underlying mechanisms that influence its magnitude and direction. Her work has appeared in the Journal of Comparative Physiology, the Journal of Thermal Biology, Nature Communications and Proceedings of the Royal Society of London B. Science Magazine recently featured Jimenez’s work related to the aging disparity between small and large dogs.

In my lab, we were interested in the mechanism that may allow for small breeds to age more slowly compared with large breeds in the context of cellular metabolism and oxidative stress. We wanted to look at normal aerobic respiration in cells and its byproducts termed reactive species, which are molecules responsible for oxidative damage, a process that can potentially attack DNA, proteins, and lipids, ultimately leading to decreased life spans in larger dogs.

In order to test this theory, we grew skin primary fibroblasts cells in the lab from small and large breed dogs, both young and old. In those cells, we measured oxygen consumption rates and glycolysis, which are pathways via which cells make energy. We also measured a number of additional antioxidant enzymes and quantified damage accumulated in lipids and DNA.

Our data suggests that rates of glycolysis were significantly higher in larger breeds, across their whole lifespan, compared with smaller breeds. Many cell types that are or become cancerous, are often associated with this glycolytic activity. This may suggest that cells from the larger breeds may be metabolically predisposed to tumor creation.