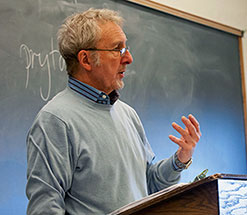 The refugee crisis is ongoing.

Robert Garland, professor of the classics at Colgate University, examines a past refugee crisis, and connects it to our present.

Dr. Robert S.J. Garland is the Roy D. and Margaret B. Wooster Professor of the Classics at Colgate University. He earned his B.A. in Classics from Manchester University, his M.A. in Classics from McMaster University, and his Ph.D. in Ancient History from University College London. A former Fulbright Scholar and recipient of the George Grote Ancient History Prize, Professor Garland has educated students and audiences at a variety of levels. In addition to teaching classics at Colgate University, he has taught English and Drama to secondary school students and lectured at universities throughout Britain as well as the British School of Archaeology in Athens. Professor Garland is the author of numerous articles in both academic and popular journals and books capturing details of all aspects of ancient Greek and Roman life, including The Greek Way of Life: From Conception to Old Age; Introducing New Gods: The Politics of Athenian Religion; and Daily Life of the Ancient Greeks. His expertise has been featured in The History Channel’s Last Stand of the 300, and he has repeatedly served as a consultant for educational film companies.

Refugees Past and Present

There are over 60,000 refugees stranded in Greece at the present moment. Many are encamped on islands like Lesbos and Chios, where they lack vital services. An unprecedented crisis? Hardly. “THOUSANDS FLEE AS XERXES ADVANCES INTO SOUTHERN GREECE!” screamed the headline of a Greek newspaper in 480 BCE – or would have done, had there been newspapers back then, when the Persian king invaded Greece by land and by sea.

Before Xerxes arrived, the Athenians evacuated their entire civilian population from Attica – a territory roughly the size of Rhode Island.

The numbers involved are hard to estimate, but probably we should be thinking in terms of 100,000 or more. They included children, women, the elderly, foreigners, and probably slaves as well.

Evacuations are always messy – as Christopher Nolan’s recent movie Dunkirk shows us. But this one must have been especially messy. When the refugees arrived at their destination, there were no medical services, no reception centers, no aid workers, no supplies of clothing, bedding, or clean water to greet them.

Most of them must have been evacuated from Attica by sea. The island of Salamis, which lies just one nautical mile south of Attica was the principal destination. It meant the refugees would have had a ringside seat as the Persians burned Athens down to the ground.

But how did the Athenians evacuate tens of thousands? They had a fleet of warships known as triremes with three banks of oars, but these would have bene very unstable laden with refugees, so I think they did what the Brits did back in 1940 – they relied largely on the merchant fleet to ferry the refugees to safety.

This was one of the most challenging logistical undertakings ever mounted by an ancient society, and envisaging it can help us to understand the nightmare scenario that refugees have always faced, always do, and always will.