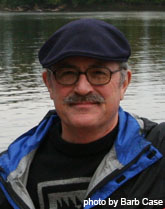 Turn off the lights.

Richard Stevens, professor in the school of medicine at the University of Connecticut, examines the effects of electric light on our circadian rhythms.

Dr. Stevens has been working for a long time trying to help figure out why people get cancer. One of his major interests has been in the possible role of iron overload. Largely on the basis of his work, published in the Journal of National Cancer Institute and the New England Journal of Medicine, the Swedish food industry decided to cease iron fortification of flour in the early 1990s. A perplexing challenge, which Stevens began to engage in the late 1970s, is the confounding mystery of why breast cancer risk rises so dramatically as societies industrialize. He proposed in 1987 a radical new theory that use of electric lighting, resulting in lighted nights, might produce “circadian disruption” causing changes in the hormones relevant to breast cancer risk. Accumulating evidence has generally supported the idea, and it has received wide scientific and public attention. For example, his work has been featured on the covers of the popular weekly Science News (October 17, 1998) and the scientific journal Cancer Research (July 15, 1996).

Artificial Lighting and Our Health

Life on Earth has evolved over several billion years with a reliable daily cycle of bright light from the Sun, and Dark at night when only stars and occasional moon can be seen.  For us humans, dusk brings a transition from daytime physiology to nighttime physiology, and dawn coincides with the change back to daytime physiology.  During nighttime, our body temperature drops, metabolism slows, hunger abates, and hormonal changes occur.

This cycle in physiology is genetically programmed, and occurs even in complete darkness.  In the natural world, the Sun in the morning keeps the cycle at precisely 24 hours.

We require dark for our nighttime physiology, but we need not be asleep.  The importance of sleep to our health has finally been recognized by medicine and by the public.  However, the importance of dark is only beginning to be appreciated.  In the natural world, without electricity, humans sleep about 6 or 7 hours in two or three segments, so we are awake for another 4 or 5 hours in the dark or in the dim, reddish light of a fire.

Firelight does not interrupt our nighttime physiology but electric light usually does; it depends very much on the intensity (or wattage), and spectrum of the light bulb.  Spectrum is the relative amounts of various colors the bulb produces.  The most effective light at night at disrupting our nighttime physiology, termed “circadian disruption”, is high bluish content like from a compact fluorescent blub, and the least effective is high reddish content like from an incandescent bulb.

The consequences for our health from electric lighting of the night, and the circadian disruption it can cause, are now being actively investigated by scientists all over the world.  Although the evidence is not yet to the point of concluding cause and effect, connections have been made to breast cancer, obesity, diabetes, and depression, all maladies common in the modern, electrified world.