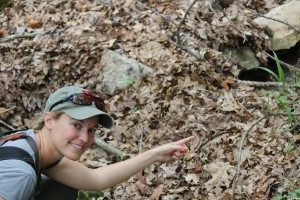 Not all birds face the same risks when leaving the nest.

Julianna Jenkins, post-doctoral research fellow at the University of Missouri, explores the survival rates of two types of birds as they venture on their own.

My dissertation work focused on understanding the transition between the nesting and postfledging life stages of Neotropical migrant songbirds on the breeding grounds. I worked with two interior forest nesting migrant focal species: the Ovenbird (Seiurus aurocapilla) and the Acadian Flycatcher (Empidonax virescens) in the fragmented forests of Central Missouri.

In the fall of 2008 I was a biologist intern at the Keauhou Hawaiian Bird Breeding Center in Volcano, Hawaii. I participated in daily care of endangered Hawaiian breeding birds: diet prep, aviary maintenance, behavioral enrichment, health checks, and daily behavioral observations.

During the summer of 2008 I worked for the Maria Mitchell Natural Science Museum, Nantucket Island, MA where I participated in research with Dr. Bob Kennedy including:  Barn Owl and Osprey banding and population monitoring, and Bay Scallop monitoring. I also participated in MA Audubon color band re-sighting and regional survey of common and roseate tern populations.

As an undergraduate at UW-Madison, I wrote and received funding ($5000) to conduct a summer research project in Costa Rica investigating the Spatial Ecology of the Margay, Leopardus wiedii in a Costa Rican Cacao Agro forest and participated in population monitoring of the Scarlet Macaw with Chris Vaughan, PhD.

Baby songbirds in the nest face naturally tough odds; unable to fly, they are easy prey for cats, snakes, and even other birds.

However, the perils don’t end when young birds venture from the nest. Our research focused on the risks baby migratory songbirds face in and out of the nest and our findings may have important implications for migratory songbird conservation.

Once out of the nest, fledglings need to gain the skills to survive on their own. It is during this time that the majority of mortalities occur.

You can think of young fledglings as teenagers getting ready to leave the house. They still depend on their parents for a lot of things and may have pretty poor judgement. While scientists know it’s a dangerous time for baby birds, they don’t know what may be affecting mortality or if risks post-fledging are similarly affected by habitat as compared to the nesting period.

So, we documented nesting habitat and survival and fitted baby Ovenbirds and Acadian Flycatchers with lightweight, temporary radio transmitters. We then followed them daily for four weeks using handheld receivers. We recorded the young birds’ behaviors and survival as well as characteristics of their habitat.

Ovenbirds and Acadian flycatchers had similar nesting success but experienced very different mortality rates post-fledging. Even though they shared the same area of habitat, around 90 percent of juvenile Acadian flycatchers and about 50 percent of Ovenbirds survived these first few weeks out of the nest. These results tell us that we cannot assume that species occupying similar nesting habitats will have similar risks after leaving the nest.

The study also is important because it sheds new light on factors that impact the survival of songbirds during a critical period in their lives. The more we know, the better equipped we will be to provide them suitable habitats.