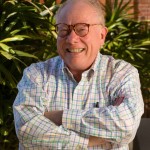 The sounds of a city can be just as distinct as its skyline.

Martin Krieger, professor of planning at the University of Southern California, explores the noises that permeate the neighborhoods of Los Angeles.

Sounds of the City

The sights, sounds, and smells of a neighborhood or a city are distinctive and pervasive. Often, we may know where we are by the odors or the noise of a place: tanning factories or botanical gardens, freeways or residential neighborhoods. I have been documenting the urban sensorium, in particular the aural background or ambient sound of different parts of Los Angeles, whether it be a neighborhood market, outside a foundry, or in a large park.

Of course, we have little recorded evidence of how cities sounded before the 20th century, but descriptions in novels and the like tell us something about bells in nineteenth-century French towns, or the clatter in a textile factory. Shafer has argued that the sound of modern cities is lo-fi, with lots of noise hiding significant sounds at a distance. Still, nowadays, we might develop accurate archives of the urban aural environment using high-fidelity surround-sound and digital records that can be preserved indefinitely.

For example, in one Hispanic neighborhood in Los Angeles, I was recording the sounds of children playing in a school yard. Otherwise the neighborhood was reasonably quiet, although freeways surround the neighborhood and add an unavoidable background hum.  But then I heard the sound of a lady who was selling tamales from her tricycle, rather faintly in the distance. So I recorded her coming closer and louder, as she shouted “Tamales!,” every twenty seconds. In the background there are other sounds of people nearby me.

When I was a child in Brooklyn, there would be vendors coming around offering to sharpen knives or selling fruit or vegetables. Here in this Hispanic neighborhood, it makes sense to offer tamales, and by moving around much as do ice-cream vendors, she enlarges her customer base. But to appreciate what is going on in this neighborhood, and in others, you have to pay attention and listen, to those everyday distinctive sounds.