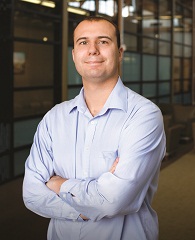 Does the mass media’s coverage of obesity affect how we perceive others?

David Frederick, assistant professor in the department of psychology at Chapman University, says how we frame the national discussion of obesity can have a big influence on those suffering from it.

Dr. David Frederick is an Assistant Professor of Psychology.  He began teaching at Chapman in 2012.  Growing up in rural upstate New York, he became fascinated with animal behavior, and his original dream was to chase monkeys around Africa as a primatologist.  This spurred him to study how social and biological factors interact to shape the bodies, brains, and preferences of human and nonhuman animals.  He enjoys teaching Research Methods, where students are taught how to use experimental and correlational research designs to understand studies on current issues such as debates over affirmative action and the causes of the wage gap between men and women, to how we can accurately measure people’s emotions.  He also enjoys teaching Human Sexuality, where students learn how hormones, evolved biological systems, and social constructions can explain cross-cultural differences in sexuality, people’s mating preferences, factors shaping sexual orientation, and how doctors respond to intersex babies.

Obesity Framing in the Media

Our new research shows news media coverage of medical studies has dramatic effects on the way people feel about overweight and obese men and women.

There are competing views about how obesity should be “framed” or talked about within the public health community.  These different views get played out in the media.

The most common view is the “Public Health Crisis” and “Personal Responsibility” frame, which presents obesity as a public health crisis warranting government intervention and people’s bad choices are what makes them overweight.

A different view is presented by people who embrace the “Health at Every Size” frame.  They emphasizes that exercise and dietary choices are far more important predictors of health than weight.  A person who exercises regularly can be both “fit and fat”.

Finally, a radically different view is expressed by supporters of the “Fat Rights” frame, which emphasizes the idea that obesity is a positive form of body size diversity and that discrimination and prejudice is unacceptable.  This is important because prejudice can affect the ability of overweight and obese people to get jobs, health insurance, and fair treatment from doctors.

In a series of experiments, we had participants read newspaper articles of medical studies, which used one of these frames.  We then assessed how prejudiced they were toward obese people, and how willing they were to discriminate against them.

Our findings show that exposure to the Health at Every Size frame does not reduce prejudice and willingness to discriminate.  This is worrisome because there is extensive evidence that weight-based stigma negatively affects health, equal access to employment, earnings, education, and medical care.  Only people who read the fat rights frame reduced their prejudice.  The findings raise concerns that the most common framings of obesity in the news media enable continued prejudice and discrimination towards overweight men and women.