Does E. Coli have a positive benefit to humans?

Blaine Pfeifer, Associate Professor of Chemical and Biological Engineering at the University at Buffalo, explores this question.

Dr. Pfeifer’s work seeks to influence cellular, metabolic, and process events required to produce new therapeutic products. As an example, he is studying how to engineer E. coli to generate new varieties of erythromycin, a popular antibiotic, which may ultimately be used to fight drug-resistant bacteria. Another project centers on generating potent anticancer agents through recombinant DNA technology. One target of interest is the anticancer drug Taxol.

Prior to arriving at the University at Buffalo, Dr. Pfiefer earned a PhD in chemical engineering from Stanford University and conducted postdoctoral research at the Massachusetts Institute of Technology.

Few bacterial species have a reputation as ominous as E. coli.

People associate the organism with danger and disease. News reports link it to cases of lethal food poisoning.

But my research shows that there’s a flip side to this story.

While some strains of E. coli do make humans ill, most are harmless and easy to grow and manipulate.

In our lab, we used one of these safe strains to produce new forms of antibiotics that could one day save human lives.

Our colonies of E. coli make an antibiotic called erythromycin — including three novel forms of the drug that kill bacteria resistant to other drugs.

This achievement is the culmination of more than a decade of research.

In its natural state, E. coli does not make erythromycin.

So the first thing we did was engineer the bacteria to produce the chemicals needed for creating the drug. You can think of this like stocking a factory with parts for building a car. 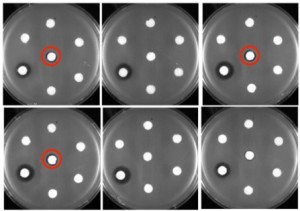 After meeting that goal, we needed to alter the assembly line: to change our E. coli in a way that caused it to create new versions of erythromycin.

Our technique was to engineer E. coli to make many forms of the drug with a slightly different shape. Using the factory analogy, this is like building many cars of the same model with different hood ornaments.

Our research could lead to new types of antibiotics for fighting infections that don’t respond to existing drugs.

We look at this as one possible solution to the emerging antibiotic-resistance crisis.

Our system allows us to engage in a game of molecular chess with harmful bacteria. As they come up with new means to thwart antibiotics, the engineering capabilities we have discovered could enable us to produce new compounds.