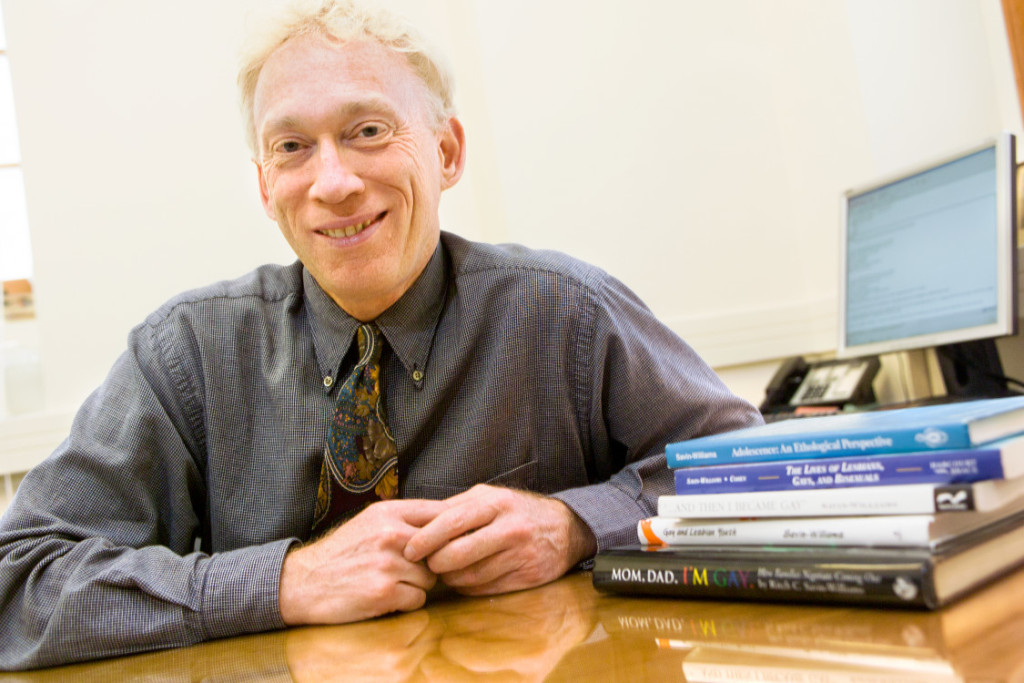 Human sexuality seems to be growing increasingly complex as the days go by.

Ritch Savin-Williams, a psychologist at Cornell University, offers a new perspective on the topic.

Ritch C. Savin-Williams is a developmental psychology professor of Human Development and Director of the Sex & Gender Lab at Cornell University. He received the Ph.D. from the University of Chicago, where he studied sex differences in dominance hierarchy formation at summer camp.

Dr. Savin-Williams is also a licensed clinical psychologist with a private practice specializing in identity, relationship, and family issues among sexual-minority young adults. He has served as an expert witness on same-sex marriage, gay adoption, and Boy Scout court cases and is on numerous professional review boards. He has served as a consultant for MTV, 20/20, the Oprah Winfrey Show, and CNN and his work has been cited in Newsweek, Time, Rolling Stone, Parent Magazine, Utne Reader, New York Magazine, Fortune, New York Times, Los Angeles Times, Washington Post, USA Today, and Chicago Sun Times. Dr. Savin-Williams received the 2001 Award for Distinguished Scientific Contribution, the 2005 Outstanding Book Award from Division 44 of the American Psychological Association for The New Gay Teenager, the 2006 APA Science Directorate’s Master Lecture in developmental psychology, 2009 APA Plenary Address, and fellow status from the Association for Psychological Science. He has also written junior high school curriculum materials for the Unitarian Universalist Association, Beyond Pink and Blue: Exploring Our Stereotypes of Sexuality and Gender.

Sexuality exists along a spectrum with degrees of heterosexuality and homosexuality, and yet we continue to categorize people as if the only options are gay, straight, or bi. But new research shows this is changing, especially among young adults who tell us self-identify outside of these three so-called “traditional” categories.

The largest of these new sexualities is the mostly straight—heterosexuals with a small degree of gayness. Indeed, more individuals identify as mostly, but not all together, straight than who identify as gay/lesbian or bisexual combined. Although more women, about 10%, than men, roughly 5%, claim to be mostly straight, the numbers are escalating as the current generation of youth feel little stigma with being “a little bit gay.”

But even those who identify as “mostly straight” exist on a wide spectrum.

Some only have sexual or romantic attraction for their less preferred sex, others experience a small degree of both same-sex desire and romantic infatuations, and some are willing to sexually experiment if the right woman or man comes along.

Research also shows self-identifying as mostly straight increases during the teenage years, peaks around the early twenties, and remains relatively stable during young adulthood. Many youth appreciate more options when it comes to defining their sexuality. As one young woman expressed it, “I sort of like that it doesn’t just have a completely or just a bisexual, but it has [an] in between. . .there isn’t always that black and white picture.”

Young adults today do not want their sexuality boxed in. They want alternatives and new ways to describe the complexity of their sexual and romantic selves and the research reinforces this spectral understanding of human sexuality.