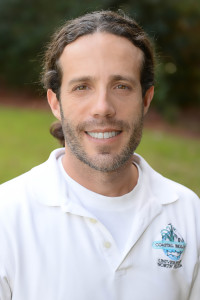 Today on The Academic Minute, the interconnectedness of nature is on full display.

A marine biologist at the University of North Florida, Cliff Ross is studying the ecology of the Florida Keys to better understand coral reefs.

Dr. Cliff Ross is a marine biologist and associate professor in the Department of Biology at the University of North Florida. His research program utilizes cellular and ecological approaches to better understand stress responses of corals and seagrasses. Dr. Ross has published over 30 peer-reviewed journal articles on how environmental pollutants and global scale climate change impact marine ecosystems. He obtained his Bachelors and Masters of Science degrees from Florida Atlantic University in 1996 and 1998, respectively. In 2005, he received his PhD in Marine Science from the University of California, Santa Barbara and was subsequently awarded a postdoctoral fellowship at the Smithsonian Marine Station at Ft. Pierce from 2005-2007. Dr. Ross has been at UNF since 2007 and is currently the Assistant Chair of the Biology Department.

Since the 1970’s coral reefs around the globe have declined by over 50% due to human activities such as pollution and climate change. When corals reproduce, they release tiny larvae into the water column. These “new-born” corals float around at the mercy of the currents for hours to months. This floating existence is a critical time point for corals as they can be exposed to many different types of stressors. Why is this important? If the larvae don’t live then you won’t have adults. Pesticide exposure is one such type of stressor. In the Florida Keys, larval release not only coincides with seasonal rains, but also coincides with the hatching and development of mosquitos.

In order to better understand the effects of pesticides and temperatures on coral larvae, we used individuals from Porites astreoides. Following exposure, survival and settlement were measured. We also quantified sub-lethal stress in the larvae by using unique cellular assays. These assays work much like a blood test in humans where you can identify if an individual is sick and to what extent. While our results suggest that some larvae may have a moderate degree of resistance against short-term exposure to ecologically relevant concentrations of pesticides, the results are far from being clear-cut.

Results were variable and dependent upon the pesticide type, the temperature used and the type of biomarker being examined. In the ocean where so many stressors can interact, our work is significant in that it serves as a warning to other scientists. What’s the warning?—when dealing with cases of multiple stressors, things can get quite complex and differential responses can be encountered.

We still have a lot to learn about corals.