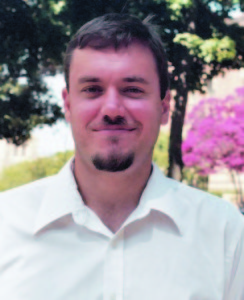 The search for life outside of our own solar system continues.

Brad Hansen is a professor of physics and astronomy at The University of California Los Angeles. His principal research interest is the search for habitable extra-solar planets and he maintains a long-standing interest in the existence and survival of planets around evolved stars. He was previous a Hubble Fellow and a research associate at the Canadian Institute for Theoretical Astrophysics.

Finding Exo-Planets via The Transit Method

Astronomers today are actively searching for planets around other stars whose characteristics make it at least possible for life to exist. One of the most promising approaches is the transit method, in which the planet passes across the line of sight between the star and the observer, blocking a small fraction of the light and causing us to observe a transient dimming. As a result, we can infer the size of the planet, as well as the distance of the planet from the star.

From this we can make educated guesses about the planetary temperature, and whether liquid water can exist on the surface.

The transit method is particularly well suited to studies of low mass stars, or red dwarfs. These are the most common type of star in the Galaxy, outnumbering stars like the Sun by ten to one. If red dwarfs possess planets, they would be the dominant planetary population in the Galaxy. They are also fainter, which means that the notional habitable distance from the star is closer than it is for the Sun. This is a positive for transit searches, because the probability that a planet passes between the star and the observer depends on the geometry of alignment, and increases if the planet is closer to the star. Thus, we have a greater chance of seeing a habitable planet around a given star if that star is a red dwarf.

Further encouragement comes from the fact that initial estimates suggest that the occurrence of planets around low mass stars is quite high. Most of the stars near the Sun are red dwarfs, so the nearest habitable planet may be quite close. Although it may be some time still before we know if the neighbours are home, we are beginning to at least get an idea of the available real estate.