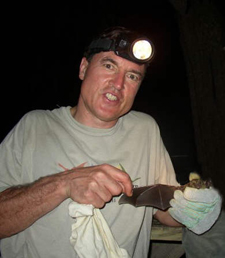 The presence of bats is a common theme for films, literature and anything angling to emit a creepy vibe.

Gary Kwiecinski, a professor of biology at the University of Scranton, focuses his research on bats. He doesn’t find them scary whatsoever. In fact, he’s working to save them.

Dr. Gary Kwiecinski is a professor of biology at the University of Scranton. Faculty often serve as a resource to the community as well. For example, Dr. Gary Kwiecinski serves as an authority on bat biology for locals as well as for the scientific community.  Articles in the media on the mysterious decline of bats featured Dr. Kwiecinski’s expert opinions. He also served as one of the organizers for the 38th North American Symposium on Bat Research (NASBR) held in Scranton.

Bats are fascinating animals! Although Hollywood portrays bats as creepy, as one who studies these nocturnal mammals, I know they do more good than harm. Bats are voracious insect predators, and many of the bugs consumed are crop and forest pests.  Some say bats are the unsung heroes of organic farming, since their agricultural pesticide service is valued at an estimated $3.7 billion a year.

The scariest thing about bats is the killer disease known as white-nose syndrome, a fungus that in some areas of the northeastern U.S. is wiping out close to 100 percent of the little brown-bat population.  This decline has impacted me personally. Until last summer, I enjoyed a small colony of bats in my attic that always fed over my gardens in the evenings. All of a sudden, there were no bats and the summer evenings are now silent and ominous without these animals.

Scientists have not been able to find a way to stop nor contain white nose fungus, and as the disease spreads across North America from the east to west, small groups of bats with resistance are being discovered. It is hoped these small pockets of resistance will aid in restoration of bat populations, after the disease runs its course. But it will take take decades, if not centuries, to restore bat populations to their pre-white nose syndrome numbers. Troubling, but there is hope for bats!

Survival might depend on these creatures’ amazing reproductive processes. Most bats have low reproductive potential, producing only one young per year, but the maternal effort to produce that one young is phenomenal. The average bat at birth is 25-30% of maternal post-partum weight (think 25 lb baby and 100 pound mother) and after a brief lactation period, the young is weaned at 95% adult size

I have found that one bat, the Jamaican fruit bat can produce 3 young per year and this helps to understand the predominance of this bat in my studies of island biogeography in the Caribbean and how this bat repopulates relatively quickly after natural disasters, such as hurricanes.