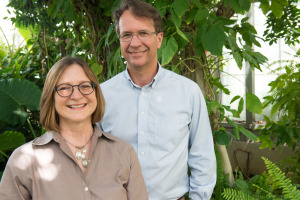 To see whether predator noises would affect plants, two University of Missouri researchers exposed one set of plants to a recording of caterpillars eating leaves, and kept another set of plants in silence. Later, when caterpillars fed on the plants, the set that had been exposed to the eating noises produced more of a caterpillar-repelling chemical.

Evidently, the chomping noises primed the plant to produce the deterrent.

Drs. Heidi Appel and Rex Cocroft, scientists at The University of Missouri, demonstrate the way plants can hear predators.

Dr. Rex Cocroft is a professor in the Division of Biological Sciences at The University of Missouri. The Cocroft Lab studies the evolution of communication and its role in divergence, speciation and social behavior. Their study animals are plant-feeding insects. Social and ecological interactions among herbivorous insects often involve substrate-borne vibrations, so they also investigate the important features of this widespread but under-studied form of communication. Furthermore, because mechanical vibrations provide information about the activity of plant-dwelling arthropods, they have recently begun investigating the plant’s ability to perceive herbivore-generated vibrations and respond adaptively to them.

Dr. Heidi Appel has a research appointment and co-directs the Schultz-Appel Chemical Ecology Lab. Motivated by a desire to explain patterns seen in nature by their underlying mechanisms, her main research interests are to understand how plants recognize and respond to insect herbivores with chemical defenses, how responses to insects are modified by demands from other stresses, and how well those defenses work. This requires a multidisciplinary approach including ecology, biochemistry, and molecular biology, and she studies Arabidopsis, poplar, and grape because of their genetic advantages for gene expression work. Her current research is focused in three areas: 1) dynamic “induced” responses by plants to attack by insects, 2) how some insects mask their attack or even manipulate plant defenses, 3) how plant responses to insect herbivores influences their responses to other stresses. She co-teaches a graduate seminar on Molecular Ecology of Plant Herbivore Interactions.

Plants have long been known to detect sound, but why they have this ability has remained a mystery.

Our experiments provide the first evidence that plants can respond to an ecologically relevant sound in their environment.

In a unique collaboration, we found that the tiny Arabidopsis mustard plant detects its predator as chewing vibrations reverberate through leaves and stems, and it reacts with chemical defenses.

What is surprising and cool is that these plants only create defense responses to feeding vibrations and not to wind or other vibrations in the same frequency as the chewing caterpillar.

Most methods of detecting vibrations use a contact microphone, but that wasn’t possible with these tiny leaves because the weight of the sensor would change the signal completely.

Using a laser and a tiny piece of reflective material on the leaf of the plant, we were able to measure the movement of the leaf in response to the chewing caterpillar. We played 2 hours of silence to some Arabidopsis plants and 2 hours of caterpillar-chewing noises to others. Then we chose three leaves around the plant, and allowed caterpillars to eat about a third of each leaf.  After giving the plants 24 to 48 hours to respond to the caterpillar attack, we harvested the leaves for chemical analysis.

The chomping noises primed the plant to produce a mustard-like deterrent to the caterpillars.

Our future research will focus on how vibrations are sensed by the plants, what features of the complex vibrational signal are important, and how the mechanical vibrations interact with other forms of plant information to generate protective responses to pests.

For much, much more on this study, click –> here