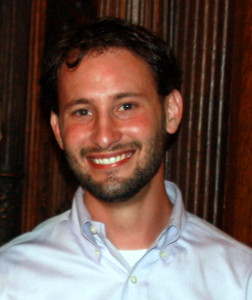 It’s common knowledge that chimpanzees are one of human’s closest relatives in the animal kingdom.

Robert Latzman, a Georgia State university psychologist, is delving into the individual personalities and neurobiology of chimpanzees and distinguishing some shared traits.

Dr. Robert D. Latzman is an assistant professor in the Department of Psychology at Georgia State University where he holds appointments in the Clinical Psychology and Neuropsychology and Behavioral Neurosciences programs and is an Associate Member of the Neuroscience Institute. Dr. Latzman received a Ph.D. from the University of Iowa and a B.S. in Human Development with Honors from Cornell University. His program of research focuses on characterizing the neurobehavioral mechanisms underlying the development and persistence of psychopathological behaviors (e.g., aggression, substance use, psychopathy).

Personality predicts a range of mental health outcomes, such as depression and substance use. In humans, neurobiological factors influence personality traits. Sociocultural influences, however, also have an impact – potentially masking the role of neurobiology.  These influences are largely absent among chimpanzees, our closest animal relative. Individual variation in these apes is therefore presumably a relatively more clear-cut reflection of neurobiology. 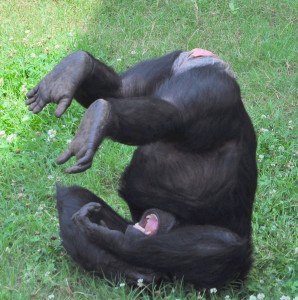 Using a statistical technique called factor analysis, which allows us to see whether the associations among scores can be explained by one or more underlying dimensions, two “meta-traits” emerged as the most fundamental level of chimpanzee personality – this hierarchical organization is similar to that found in humans. One related to whether an animal is generally dominant and undercontrolled, termed “Alpha,” and the other related to whether an animal is more playful and sociable, termed “Beta.” Consistent with human findings, these two “meta-traits” ultimately differentiated into five factors largely parallel to the most widely-studied model of human personality, the Five Factor Model.

We further examined sex-specific associations between personality and variation in a gene controlling vasopressin – a neuropeptide expressed in the brain and associated with several social behaviors. Male chimps born with a common variant of the gene were found to be more dominant and disinhibited, whereas females with this genetic variation tended to be more submissive and inhibited.