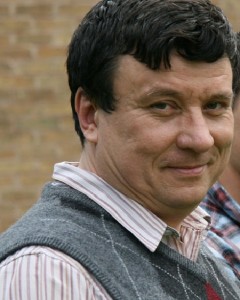 Dr. Oleg Kolosov, a physicist at Lancaster University, is developing new nano-science techniques hoping to advance and improve upon the detection of Alzheimer’s disease.

Dr Kolosov’s group research [Nano-Science] focuses on nano-scale physical properties of various materials from biomolecules to graphene. He holds a PhD from Moscow Institute of Physics and Technology and he was Advanced Fellow at Oxford University and a Director of Innovation at Symyx Technologies – a high tech company pioneering combinatorial materials discovery.

Alzheimer’s disease is the most common cause of memory problems in older people. The disease can be somewhat slowed down but there is no full cure for it yet. The best approach to treating this disease will probably be to identify it early, before too much damage has been done to the brain, and then stop it from progressing any further.

One of the characteristic changes in the brains of victims of Alzheimer’s disease is the formation of tiny structures from a protein called beta-amyloid that sticks together to first form long fibres, and then dense blobs called senile plaques. At first, physicians and scientists thought that the disease was caused by such plaques, but then they discovered that the real cause could be even smaller structures called ‘oligomers’. These oligomers made from only a few molecules of beta-amyloid stuck together can cause damage to nerve cells and interfere with memory. Preventing the formation of these oligomers may be one way of stopping the development of Alzheimer’s disease.

Unfortunately, due to the very small size of these oligomers, it is very difficult to spot them and to tell them from other proteins. To solve the problem, Lancaster scientists used a new Ultrasonic Force Microscope – inspired by the motion of a sewing machine. It uses a tiny vibrating needle about 10,000 times narrower than a human hair, which moves quickly up and down around the sample like the foot of a sewing machine needle while gently pricking the very top layer of the surface of the sample. This type of motion eliminates the friction between the sample and the needle resulting in a better quality, high contrast nanometre-scale resolution image telling us exactly where these nasty “oligomers” are.

It is one of a new generation of tools being developed worldwide to bring the oligomers into focus, enabling medical researchers to understand how they behave and develop new medicines for different diseases, and in particular, for Alzheimer disease.