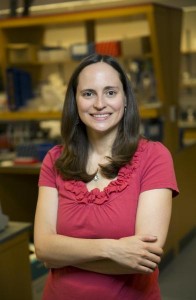 Yawns are something of a physiological mystery.

Elizabeth Cirulli, an assistant professor of medicine at Duke University, is attempting to unravel the confusion surrounding yawns.

Liz Cirulli is an assistant professor at Duke University’s Center for Human Genome Variation. She earned her doctorate in 2010, graduating from Duke University’s Program in Genetics and Genomics. Liz is interested in the genetics underlying normal variation in healthy humans, with a focus on traits relevant to disease and involving neuronal function, for example cognitive performance, face recognition, and time perception. She is also interested in studying people with extreme traits, such as those living to at least 100 years of age.

It’s been proven that yawning is contagious. Humans have contagious yawns in response to hearing, seeing or thinking about yawning. This is different from spontaneous yawning, which occurs when someone is bored or tired.

Why certain individuals are more susceptible to contagious yawning remains poorly understood. Interestingly, people with autism or schizophrenia, both of which involve impaired social skills, demonstrate less contagious yawning despite having spontaneous yawns.

While previous work has suggested a connection between contagious yawning and empathy, we have completed a study showing that contagious yawning may decrease with age and is not strongly related to variables like empathy, tiredness and energy levels.

We recruited 328 healthy volunteers who completed cognitive testing and a lengthy questionnaire. The participants then watched a three-minute video of people yawning and recorded the number of times they yawned while watching the video.

We found that participants yawned between zero and 15 times during the video. When people were tested multiple times, their yawn response remained fairly stable.

In contrast to previous studies, we did not find a strong connection between contagious yawning and empathy, tiredness, intelligence or time of day. Instead, we found that as age increased, participants were less likely to yawn. However, the vast majority of the variation in the contagious yawn response remained unexplained, suggesting that genetic variants may play a role.

We are now beginning genetic studies of this trait. It is possible that if we find a genetic variant that makes people less likely to have contagious yawns, we might see that variant or variants of the same gene also associated with schizophrenia or autism. Even if no association with a disease is found, a better understanding of the biology behind contagious yawning can inform us about the pathways involved in these conditions.