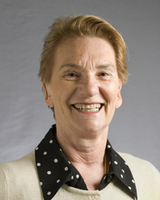 Does profit sharing improve the community at large?

In today’s Academic Minute, Jane Costello, a professor at Duke University’s Insitute for Brain Sciences, profiles an experiment involving just that. In 1994, a tribe of Cherokee Indians opened a casino and shared the profits directly with the community.

Costello was educated at Oxford University and the London School of Economics and Political Science, where she received her Ph.D., and at the University of Pittsburgh, where she did postdoctoral work in psychiatric epidemiology. She has been on the faculty at Duke since 1988.

Her work aims to integrate developmental psychopathology with epidemiology. She is co-director of the Developmental Epidemiology Program at Duke, and for the past two decades has been running a longitudinal, population-based study designed to examine the developmental origins and course of psychiatric and substance use disorders in young people. She is currently one of the principal investigators on NIDA’s Gene-Environment-Development Initiative, which is conducting a genomewide association study of risk for substance use disorders in over 12,000 youth.

She is a principal investigator on the Center for the Study of Adolescent Risk and Resilience (C-StARR) at the Center.

Twenty years ago, the Eastern Band of Cherokee Indians opened a new casino in western North Carolina, and made an interesting decision. The tribe decided to share profits directly with its members, in cash payments of around $4000 per person per year.

My research team was already studying child mental health in the area. We wondered: how would the extra money influence the future of the children who benefited from this monetary gain?

Over the ensuing decades, we tracked the answer.

We compared children’s outcomes before and after the income supplements began. We also compared the Native American children with other area children who did not receive the extra income. The study looked at emotional and behavioral problems, physical health and obesity, school performance, crime, and education.

Among children whose families were already prosperous, or who were desperately poor, we found little change.

One group was different, though.  For families that hovered near poverty, the cash supplement lifted them above the federal poverty line. And in those families, we saw striking changes.  Four years before the supplement, these children had high levels of anxiety, depression, and conduct problems.

Four years after payments began, these rates were dramatically lower.

Now, these children are into their 30s, and the results are compelling. As adults, those who received the cash supplement use less alcohol and fewer drugs. They commit fewer minor crimes, and are more likely to graduate from high school. Teen pregnancies are less common in this group, and at age 26, the average IQ of this group is a bit higher.

Economists have since tracked the costs of the $4000 annual supplement versus the savings in expenditures on crime and medical care. They find that by age26, benefits exceed costs by a factor of three to one.

The numbers carry a clear message: we can choose to pay less now or pay more later. Our tax dollars can support poor families while their children are growing and developing. Or we can pay for their lack of education, obesity, alcohol abuse, and crime down the road in our healthcare and criminal justice systems.

The statistics speak for themselves.