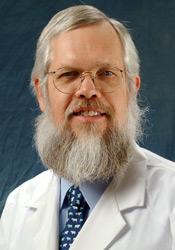 The Latin name myotonia congenitamight not mean much to you, but you’ve likely seen them in action.

Dr. Phillip Sponenberg, professor of pathology and genetics at the Virginia-Maryland Regional College of Veterinary Medicine at Virginia Tech, fills us in on one of the internet’s favorite animal oddities: the fainting goat.

Dr. Phillip Sponenberg is a professor of pathology and genetics in the Department of Biomedical Sciences & Pathobiology in the Virginia-Maryland Regional College of Veterinary Medicine at Virginia Tech. Sponenberg received his DVM from Texas A&M University and his Ph.D. in veterinary medicine from Cornell University in 1979. He joined the faculty of the college in 1981. Sponenberg’s research interests are genetics of domesticated animals, coat color genetics, conservation of rare breeds of livestock, diagnostic pathology, and reproductive pathology. Sponenberg is a member of the American Veterinary Medical Association and the Virginia Veterinary Medical Association. Sponenberg also serves as the technical programs director of the American Livestock Breeds Conservancy.

The first thing to know is that Fainting goats don’t actually faint, but have a muscular condition called myotonia congenita. So, the episodes leading to the common name don’t occur in the brain at all, but are limited to the muscles.

The condition prevents the muscle cells from relaxing quickly after contraction, and this leads to the situation where the limbs stiffen, and if the goat is off balance, it can fall over. The stiff episodes are over in a few seconds.

This trait gives these goats a host of common names, including fainting goats, stiff leg goats, nervous goats, or wooden leg goats. The important detail is that they never lose consciousness during these episodes.

We know from related conditions in people, dogs, and other animals that the condition itself is painless. In goats, it actually has some advantages. These goats were long valued in their original Tennessee homeland because they are easy to fence in. They cannot climb or jump, which makes them much easier to manage and contain than other goats.

In addition they are quiet, good mothers, resist parasites well, and have heavier muscling than goats without myotonia. All of these attributes combine to make them a good choice as a meat-producing goat, a role for the breed that has been increasing recently. They are also popular as pet goats due to their quiet attitudes.

This breed of goats, in common with many local breeds, became quite rare in the late 20th century. Numbers plummeted to the point that the Livestock Conservancy listed them as threatened. Populations have now increased so that they are much more secure, and listed as recovering. As far as anyone knows, they are uniquely American, so guarding their status here is essential to their survival globally.