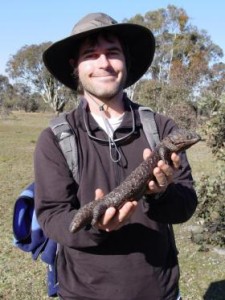 The leatherback turtle population is getting some much needed help.

Dr. John Roe, assistant professor of biology at the University of North Carolina at Pembroke, is tracking, studying and helping to develop strategies that will help to revitalize the leatherback population.

Dr. John Roe is an assistant professor in the University of North Carolina at Pembroke’s Department of Biology. Dr. Roe’s main area of research focuses on how an organism’s physiology, behavior and life history traits relate to their ecology, evolution and ultimately, to their conservation. He earned his PhD in 2008 from the University of Canberra.

The leatherback sea turtle is among the largest species of living reptiles.  Unfortunately, the Pacific population has declined by more than 90% since the 1980s.  Conservation efforts for this endangered species have concentrated on protecting nesting beaches, but threats also occur at sea from accidental hooking or entanglement in fishing gear, called bycatch.  Longline fisheries targeting swordfish and tuna have set 760 million hooks in the Pacific each year, which can add up to unsustainable mortality from injury or drowning for turtle populations already so close to extinction.

Bycatch is undesirable for fishermen and conservationists alike, but information that could help avoid such interactions has long remained elusive.  New data from 135 leatherbacks tracked via satellite has revealed a rare broad-scale perspective on times and locations where the turtles aggregate to forage and pathways traveled during migration.  When merged with data on fishing activities, times and areas of heightened bycatch risk have now been identified – reducing our largest ocean into a more manageable set of target “hotspots”.

Specific regions highlighted in our analysis include seas of the Indo-Pacific islands near nesting beaches of Papua New Guinea, largely confined to political boundaries of nations that could facilitate bycatch management.  Other probable hotspots occur far offshore, including in the South Pacific Gyre, a large rotating current southwest of the Galapagos Islands.  Such offshore regions may prove more problematic for management, as they lie outside of national jurisdiction where regulations are few and enforcement is nil.

Strategies to avoid bycatch will need to be creative and tailored to the opportunities and challenges of each situation, but could include the establishment of marine protected areas or seasonal restrictions on fishing activities and gear modifications.  However, we now have a much clearer picture of where to focus such conservation efforts.