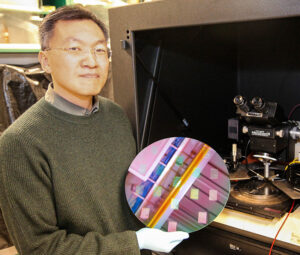 In the future we may all have quantum computers in our homes.

Ji Ung Lee, professor of nanoscale engineering at SUNY Polytechnic Institute, examines how we might get there.

Ji Ung Lee received his Ph.D. in Electrical Engineering from the University of Wisconsin-Madison.  He is currently Professor of Nanoscale Engineering at SUNY Polytechnic Institute, a position he took in 2007. Previously, he was at Argonne National Laboratory from 1996-1997 as a post-doctoral scientist and at the General Electric Global Research Center from 1999-2007 as a Senior Scientist.  His interest is in measuring anything small.  His current focus is on fabricating and characterizing nanoscale devices using carbon nanotubes, graphene, transition metal dichalcogenide semiconductor, topological insulators, and DNA.  He is the inventor of the first carbon nanotube p-n diode, for which he was awarded the GE Global Research Hull Award, the highest individual honor for a young scientist, and the NASA Nanotech Briefs Nano50 Technology Award.  He is the recipient of two IBM Faculty Awards (2007, 2012). He holds 25 issued patents, has given over 80 invited talks in the area of nanoscale electronics, and has over 80 published articles.

A Potential Path to a Quantum Computer in Every Home

A branch of mathematics called topology is helping to revolutionize our understanding of materials. It may also lead to far-reaching applications, such as fault-tolerant quantum computers that don’t unintentionally cause errors.

Topology is concerned with the geometric properties of any object that remains the same as it is smoothly deformed. For example, a coffee mug and doughnut share one thing in common: a hole. They are said to be topologically equivalent since one can smoothly transform to the other.  We say a “mathematical invariant” makes these two objects identical, even though they do not look the same.

In physics, we are using invariant properties to better understand the origin of certain phenomena. The “integer quantum Hall effect” describes how the electrical resistance of certain materials under a large magnetic field becomes quantized in integer multiples of a resistance quantum. That simply means we can measure a material’s electrical resistance and expect specific results. It’s like measuring the number of cars a person owns—one or two, but we know it can’t be 1.5, because it doesn’t make sense to own 1.5 cars.

Remarkably, the whole number we end up with is precisely defined to the ninth digit. This high certainty arises because the quantum Hall effect has a topological origin.

Because topological systems lead to precise results, this understanding of materials may lead to revolutionary quantum computers that avoid errors. Quantum bits, or qubits, the basic units of quantum computing that expand upon today’s 1’s and 0’s, are prone to errors. However, quantum computation based on Majorana fermions, which have topological properties by acting as a pair, may eliminate errors or reduce them to insignificant levels.

This is how our research group is developing scalable, fault-tolerant, quantum computers, which someday may be as ubiquitous as classical computers are today.