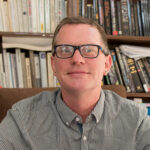 On University of Redlands Week:  More powerful brain scans can lead to changes in declarations of brain death.

Tim Seiber, associate professor of science and media studies, takes a look inside our heads for more.

Tim’s primary interests are in the history of media and visualization, especially as it pertains to scientific and medical image-making from the 17th century to the present.  He teaches courses on the history of science, media history and theory, feminist and queer science studies, and digital culture. He often co-teaches courses with colleagues and students in the sciences and humanities, and encourages integrative learning inside and outside the classroom through events planning, independent studies, and media production.

Pictures on the Threshold between the Living and the Dead

While brain images from drawings to photographs have a long history, it was not until the mid-1980s that scans of living brains could show structure and function in a medically useful way. Today, these scans are being asked to detect and depict less-than-fully-conscious brain states including brain death.  Brain death is a fraught medical, political, and cultural subject bound up with the organ donation system, religious values, the law, and bioethics.  First published in 1968, diagnostic standards for determining brain death were behavioral: a person could be declared brain dead if they did not respond to stimuli, breath without a respirator, exhibit reflexes, or show electrical activity.

Importantly, this declaration allowed for the harvesting of urgently needed healthy organs for donation. But today, with more powerful brain scanning tools, there is mounting pressure to not just observe the brain dead body, but to show brain death itself. The increasing importance of brain imaging was made popular in the case of Terri Schiavo.  After twenty years hospitalized, in 2005 a widespread public debate about her brain status was structured visually as a diptych, with family photographs contextualized as evidence of her aliveness contrasted to a brain scan showing massive tissue loss. A court finally determined, using images as evidence, that Schiavo was in fact brain dead.

This case and others show how increasingly reliant we are on brain portraits to structure, narrate, and give scientific backing to medical and cultural discussions about brain death. However, my research shows that the promise that powerful images might dissolve ongoing difficulties about the ethical principles, cultural rituals, religious values, and public policy intermingling in the zone between the living and the dead is overstated. While families and others may want these images to do the work of making brain death decisions more precise and certain, in fact current imaging cannot provide visible evidence of brain death.