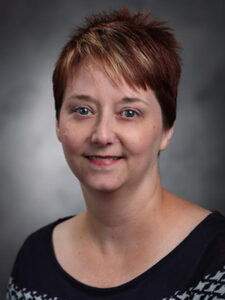 On University of West Georgia Week: Veterans are in need of employment upon returning home or exiting the service.

Kelly Dyar, assistant professor of nursing, looks at one way to get them employed.

Dr. Kelly Dyar, assistant professor in the University of West Georgia’s Tanner Health System School of Nursing, has been a registered nurse for 30 years, with her career beginning by caring for individuals who experienced kidney failure. Since then, she has remained active in caring for people on dialysis and providing care to patients requiring apheresis therapies as a result of blood disorders. She earned her master’s degree in nursing from Samford University in 2013 and her doctorate in nursing education from UWG in 2017.

This segment was recorded at The WOLF Internet Radio in the Department of Mass Communications at the University of West Georgia.

Men are underrepresented in the nursing workforce. Recruitment of military veterans, who are predominantly male, may be one method of addressing this gender disparity. Through a qualitative research study with veterans from across the U.S., I explored the lived experience of being a male combat veteran enrolled in a nursing program.

The overarching finding was that veterans credit their time in the military with helping them remain focused on achieving their objective of becoming a nurse and provides them with the skills to manage the challenges in their nursing program. Several themes also emerged.

First, tools of the trade. Veterans described the abilities gained in the military that help them remain focused. These strengths are a sense of discipline, leadership skills, accountability, and time management.

Second is identity. The veterans described themselves as people of honor who do the right thing and have a deep desire for others to view them as more than a veteran.

Turbulent waters describes the barriers, frustrations, and emotions experienced as a veteran attending nursing school, including complex mental health issues, perceiving classmates as lacking discipline, and a sense of isolation.

The final theme of fuel represents what institutions can do to support veterans in remaining focused on their objective. Fuel can include instructor accessibility, veteran-specific campus initiatives, and the routine and structure of their nursing program.

Every college classroom may include veterans. Despite the challenges they face, veterans bring a wealth of knowledge, skills, and experience. When teachers join them in their journey, providing support along the way, veterans can be successful.