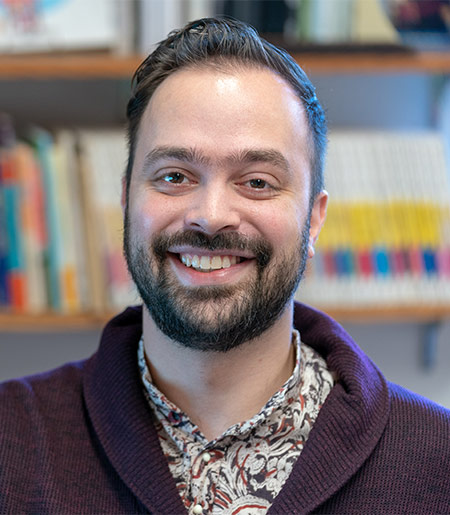 On Cornell University Week:  Video games aren’t only for those with eyesight.

Andrew Campana, assistant professor of Asian studies, explains how communities of blind and low-vision players stay in the game.

Andrew Campana is an assistant professor of modern and contemporary Japanese literature in the Department of Asian Studies at Cornell University. In his current book project on Japanese poetry across media, he explores how poets in the 20th and 21st centuries engaged with new technologies, such as cinema, tape recording, the internet, and augmented reality. He is also working on a second project—on the intersections between electronic literature, video games, and disability arts in contemporary Japan—drawing from his experiences as part of the Trope Tank at MIT, a lab dedicated to developing new understandings of computation and literary practice. He has performed and published widely in both English and Japanese as a multimedia poet and translator.

Taking the Video out of Video Games

What happens if you take the “video” out of “video games”? The term itself is biased towards the visual. But communities of blind and low-vision gamers across the world are pushing back against the assumption that you need to see in order to play or create digital games. They are proving their point with increasingly sophisticated “audio games,” which are playable through sound alone and come in just about every genre. There are now audio puzzle games, dungeon crawlers, racing games, and even sound-only equivalents to old arcade classics like Space Invaders.

Some of the best audio games have come from Japan. The first-ever audio game released for a game console was the 1997 Real Sound. Something like a choose-your-own-adventure radio play, it was designed to be enjoyed by blind and sighted players equally.

Blind gamers across the world have had to invent massively complicated processes to be able to play Japanese audio games, creating and modifying programs that live-translate Japanese-language audio on the fly. Global communities of blind and low-vision players have developed surrounding these games, crossing national and linguistic boundaries through the common goal of making video games accessible.

Because audio games are far more than a niche subgenre of video games. They challenge deep-seated preconceptions about how we engage with digital media—from big ideas like what interactivity entails, to the most basic assumptions like the necessity of a screen. They ask us what might happen if other voices—the ones that tend to get left out of the usual stories about technology—are amplified in the mix. They model a world where accessibility and inclusivity are a given. And, amid a constant arms race by game companies to develop better and better graphics, they show us that the best game of the year might not have graphics at all.