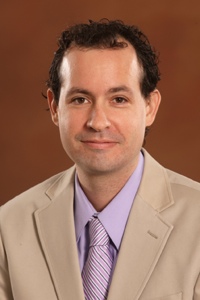 The first desegregation battle in Atlanta was fought in an unusual place.

Professor Demas specializes in the history of race and popular culture in America, specifically sport and African American history. He is the author of Game of Privilege: An African American History of Golf (University of North Carolina Press, 2017) and Integrating the Gridiron: Black Civil Rights and American College Football (Rutgers University Press, 2010). Game of Privilege received both the USGA’s Herbert Warren Wind Award (best golf book of 2017) and the North American Society for Sport History Book Award (best sport history book of 2017). Professor Demas makes periodic media appearances and his work has earned awards from the National Endowment for the Humanities and the Fulbright Program.

He is also editor of The Michigan Historical Review, the only scholarly publication devoted to Michigan history.

Golf and Racial Segregation in Atlanta

In December of 1955, Dr. Hamilton Holmes and his son, Alfred, were brimming with excitement. They had just prevailed before the U.S. Supreme Court in the case of Holmes v. Atlanta, the first example of court-ordered desegregation in Georgia’s modern history. Yet the excitement within the Holmes household and other black families in Atlanta “was tempered by a fear of white retaliation” fueled by anonymous threatening phone calls and talk of violence against the family. Remarkably, that tension centered not on racial segregation in Atlanta’s public schools or voting booths – but rather on its golf courses. Holmes v. Atlanta forced the city to allow African Americans access to its public links.

Moreover, Hamilton and Alfred’s fight against segregation in that seemingly sedate world of middle-class leisure was much more than a curious sidelight to the quest for civil rights in schools, churches, and businesses. In fact, it was intricately tied to that narrative; three weeks earlier Rosa Parks and Martin Luther King Jr. had launched the Montgomery Bus Boycott in Alabama. Six years later, Alfred’s son became one of the first two black students to attend the University of Georgia.

Holmes vs. Atlanta was the most visible golf integration lawsuit but others were fought nationwide, at least twenty-eight significant cases from 1941 to 1969 alone. Like the Holmes family, everyday black golfers around the country used the game and its symbolism to shape their communities and the struggle for civil rights. Meanwhile, elite African American players also influenced the professional game – from John Shippen (who nearly won the 1896 U.S. Open) to Tiger Woods. Contrary to popular memory, African Americans have played a major role in the history of golf in America.