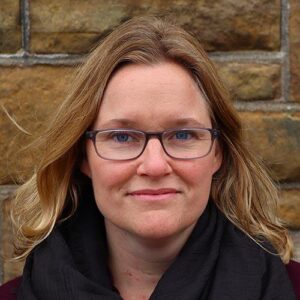 Americans are confused about religious freedom.

Jenna Reinbold, associate professor of religion at Colgate University, examine why this can have implications for our country.

Jenna Reinbold, associate professor of religion at Colgate University, studies the interaction of religion and law in the contemporary world. Her particular focuses include controversies over the separation of church and state in the United States and the role of religion and secularism in the spread of universal human rights. Reinbold is the author of numerous articles and chapters as well as the book Seeing the Myth in Human Rights (Philadelphia: University of Pennsylvania Press, 2017), which won the American Academy of Religion’s 2018 Award for Excellence in the Study of Religion. Her words have appeared in The Kansas City Star, Religion and Politics, and on Salon.com. Reinbold earned her bachelor’s degree at Portland State University and her MA and PhD at the University of California, Santa Barbara.

Can the U.S. government require a church to perform a wedding for an LGBT couple? Almost half of Americans are either unsure of the answer to this question or incorrectly believe that religious organizations can be required to do this. In fact, according to a recent survey conducted by PRRI, Americans are more united in their lack of knowledge about the current state of religious freedom and LGBT protections than they are in their opinions about what should be done to ensure such protections.

Americans who lack such knowledge are more susceptible to misinformation, and they may also be more prone to demonize citizens with differing views. For example, during the build-up to the 2016 election, many politicians and religious leaders drew upon Americans’ uncertainties about today’s religious freedom landscape to urge conservative Christians to view Democrats as basically “anti-Christian.” Such arguments are easier to make when Americans are uncertain about the basic legal protections currently afforded to religious organizations.

It is important to note that Americans are not entirely at fault for today’s confusions. Since the 1990s, the U.S. government has been at war with itself over the meaning and proper parameters of religious free exercise. More recently, victories in the realm of LGBT rights have increased both the complexity and the hostility of these church-state debates. Even the U.S. Supreme Court, the nation’s highest arbiter of the law, is intensely divided over this issue.

Though support for LGBT rights is higher than it has ever been, Americans remain deeply confused about the legal mechanisms that currently exist for resolving conflicts between LGBT rights and the right of religious free exercise. Unfortunately, such confusion is likely to exacerbate the political divisions that already exist around this contentious issue.