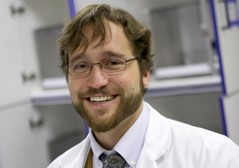 What makes someone dependent on e-cigarettes?

Ari Kirshenbaum, professor of psychology at St. Michael’s College, devised a game to find out.

Dr. Ari Kirshenbaum is a professor of psychology at Saint Michael’s College in Colchester, Vermont, where he researches behavior influenced by recreational drugs.  His current work on human psychopharmacology of e-cigarettes is funded by a grant from the National Institutes of Health, National Institute of Drug Abuse. Other areas of study include toxicology, bioethics, and public-health policy.

Nicotine is known to alter learning, memory and behavior. We study these in our lab by giving folks nicotine-containing e-cigarettes, and witnessing how they affect video game performance. Drugs alter behavior in different ways, so we’ve explicitly designed a video game that is sensitive to the known psychological effects of nicotine.

We are searching to clearly identify the factors that make e-cigarettes dependence-producing, and it’s not as straight-forward as “well, nicotine is enjoyable.” What might be argued is that people enjoy the process of smoking or vaping, but their enjoyment of the drug nicotine itself, may not drive use.  Nicotine doesn’t produce the same powerful hedonic effects like alcohol or heroin do; so, whatever makes nicotine rewarding is more subtle.

Smokers develop a deep fondness for the sensations of smoking, and it’s reasonable to expect that the same is true for e-cigarettes. Nicotine enhances the enjoyment of these sensation in a variety of ways, and sophisticated research in other labs shows that clusters of neurons that lie at the heart of the brain’s reward circuit become sensitized by nicotine. This finding hints that nicotine has the ability to enhance any reward or activity, and what we’re finding with video games supports this conclusion.

Nicotine containing e-cigarettes, versus placebo, enhance our participants’ interest in playing the video games and their enjoyment of them, and this is occurring at doses that are a fraction of what is found in most commonly available vaping products. Each of our participants visits the lab on several occasions, so we have the opportunity to see how repeated exposure of controlled doses of e-cigarettes influences many aspects of psychological functioning. Preeminent among these aspects is whether limited exposure to e-cigarettes provokes early-emergent symptoms of withdrawal, or changes how our participants experience their life outside of the laboratory.