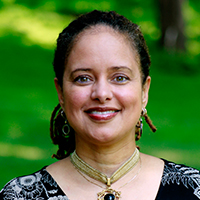 On Connecticut College Week:  Shopping isn’t always a fun activity for everyone.

Professor Dunlap graduated from Wayne State University with high distinction and with honors in psychology. She was awarded a McKnight Doctoral Fellowship from the Florida Education Fund.

She earned her master of science and her doctor of philosophy degrees in social psychology from the University of Florida in 1993. While attending graduate school, she taught college and worked as a counselor for Head Start children and their families at a community mental health facility.

Professor Dunlap has served in many board and other leadership positions over the years such as with the New England Psychological Association (NEPA), the national Association for Women in Psychology (AWP), the American Association of Higher Education (AAHE), Campus Compact, Society for the Psychological Study of Social Issues (SPSSI), and United Community Family Services (UCFS).  Most recently she serves on Brown University’s College & University Engagement Initiative’s (CUEI) Lynton Award National Advisory Committee.

She reviews for journals such as Teaching of Psychology, Psychology of Women Quarterly (PWQ), and the Michigan Journal of Community Service. She was book review editor of Sex Roles: A Journal of Research from 2002-2005.

She has written books, journal articles, chapters, essays, and poetry about her research and experiences involving college students working in community service-learning settings; intergroup relations; and perceptions and misperceptions of African American child rearing; and most recently, Black and minority bodies shopping and other consumer marketplace experiences.

She has traveled extensively and often presented her work nationally and internationally, with among her travels being Germany, France, Finland, Russia, Mexico, Canada, South America, and throughout the United States and Caribbean.  She has won local, state, and national awards for her community-engaged work such as the State of Connecticut African American Affairs Commission (AAAC) 2005 Woman of the Year, and the 2008 New England Resource Center for Higher Education’s Ernest J. Lynton Award for the Scholarship of Engagement, and the 2018 National Council of Negro Women (NCNW) Eunice McLean Waller Award for Outstanding Work in Education and Community in 2018. She has been called on to consult for universities, schools, social service and community agencies, and businesses.

Most people think of the American marketplace as a place of leisure, relaxation, and quality time with family and friends. However, for many minorities in our society, there may be a greater complexity and risk to moving about in the retail, restaurant and other consumer marketplaces.

I conducted 20 in-depth interviews with people across the country and from various backgrounds. They offer a qualitative tapestry of what shopping, and otherwise moving about and engaging in the consumer marketplace, may look like for minorities. There are three major issues with which minorities struggle: being overly-monitored, receiving inequitable treatment and experiencing traumatic incidences. What is particularly striking is that it is imbedded within an all-American context that appears harmless or even fun to many. Therefore, its insidiousness may escape the conscious awareness of a relative few who experience it, and great numbers of those who perpetuate it.

The interviews add to the existing research literature on the minority marketplace experience and reveal minority concern with not only shopping, but also with humane living in America. These introspective voices that often go unheard illustrate that there continues to be an ongoing precariousness to something often thought to be as harmless as shopping.