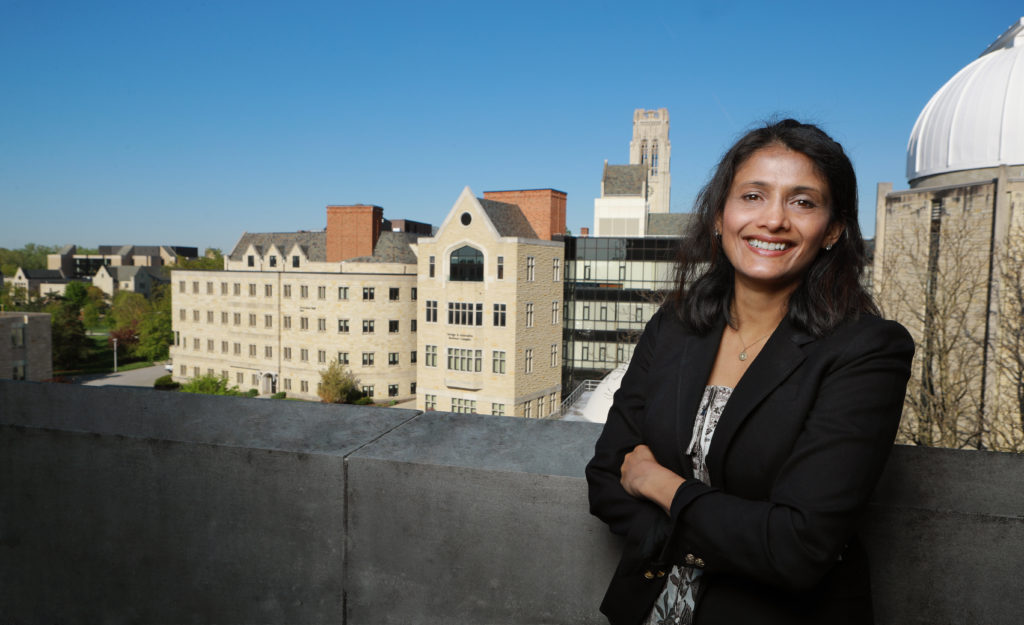 On University of Toledo Week: Some galaxies are cranking out new stars.

Rupali Chandar, professor of astronomy, examines how these extreme systems compare to our Milky Way.

Rupali Chandar, professor of astronomy, studies the origins of the universe, she focuses on nature’s biggest building blocks – galaxies. An expert in galactic formations and life cycles, Chandar’s research is casting aside the long-held belief that dense star clusters, once formed, endured for billions of years. These clusters may well begin to disperse after just a few million years, her research has shown. Additionally, Chandar, a National Science Foundation Career Award grantee, is using her status to encourage more young girls to explore astronomy and the natural sciences.

Next year is the Hubble Space Telescope’s 30th anniversary. NASA’s flagship mission continues to deliver cutting-edge science and help scientists unravel mysteries of the universe, particularly in understanding the origins of galaxies.

The deepest image ever taken of the universe, known as the Hubble Deep Field, revealed the most distant galaxies ever seen by man. These galaxies are so far away that their light has been traveling to us for more than 12 billion years, so we are seeing them as they were in the past, when the universe was very young. These young galaxies are different from the Milky Way and almost all other modern-day galaxies because they are forming stars at extremely high rates, rates that are more than 100 times faster than in our own galaxy. These pyrotechnics are going off as gas-rich, young galaxies collide and merge, setting off intense bursts of star formation as massive clouds of gas collide.

My research focuses on comparing these intensely star-forming galaxies, which are rare – but not completely absent – in the modern universe, with more normal ones like our own Milky Way. With a team of leading scientists, we are using the keen eye of Hubble to dissect 13 of the closest extreme star-forming galaxies, to study their most massive stars and clusters of stars, something that isn’t possible in very distant galaxies. We have already studied 20 normal galaxies using Hubble, and found that the rate of star formation has been modest and fairly constant over the past billion years or so. This new research will help us better understand how star formation is triggered and proceeds in these extreme systems, in contrast to normal galaxies, and give us new insight into galaxies as they were forming in the young universe.