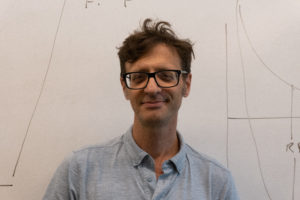 Our understanding of chemical bonding might need an update.

The elements of the periodic table are the building blocks that make up all matter in the universe.  Currently, there are only 118 elements that we know of, yet there are an infinite number of ways these elements can combine to create the diverse array of materials all around us.

My work is focused on chemical bonding, the process by which individual atoms of the elements come together to make molecules. I use valence bond theory which is rooted in the mathematics of quantum mechanics and allows for the determination of the source of a bond by breaking it down into individual energy contributions.  This is only possible with the help of modern computers that can quickly and reliably perform repetitive calculations.

This approach has led to the discovery of a new form of chemical bonding, charge-shift bonding. For over 100 years the prevailing view has been that chemical bonds are either covalent, where electrons are shared, or ionic, where electrons are completely transferred.  However, valence bond theory calculations have shown that certain bonds are unstable when considered as covalent or ionic alone.  In these cases, the bond only exists as a resonance hybrid, or mixture, of covalent and ionic contributions.

Charge-shift bonding is not a rare occurrence that only appears in exotic molecules.  For example, the F2 molecule, long used as a textbook example of covalent bonding, actually has a charge-shift bond.

Originally just a theoretical construct, there is a growing body of experimental evidence that verifies the charge-shift bonding concept. We are currently working on identifying charge-shift bonding cases across the periodic table and validating the concept so that it will be considered alongside covalent and ionic as a distinct form of chemical bonding. Ultimately, if we can understand chemical bonding, we can control the process and make new materials with useful properties.