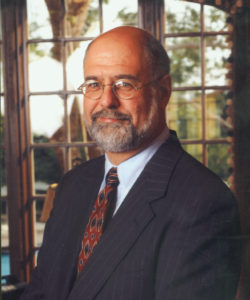 On Westminster College Week:  The 2016 presidential election may have signaled the end of neoliberalism.

James “Cid” Seidelman, Ph.D., is distinguished service professor of economics at Westminster College in Salt Lake City, Utah. He returned to teaching in fall 2015 after serving 11 years as provost and vice president of academic affairs, and 13 years as dean of the Bill and Vieve Gore School of Business.

Seidelman currently serves as chair of the Salt Lake Valley Hospitals Board of Intermountain Healthcare, and serves as a board member on the Intermountain Research and Medical Foundation and Arnold Machinery Company. Seidelman was formerly the board chair of CIT Bank and a commissioner and chair of the Northwest Commission on Colleges and Universities. Other board assignments have included the Council of Regional Accrediting Commissions, the Utah Foundation, the Utah Technology Council, the Utah Information Technology Council and the Bonneville Resource Conservation and Development Council. He has also played leadership roles with the Competency-Based Education Network and the New American Colleges and Universities Consortium. In addition to a number of publications, consulting, accreditation and expert witness engagements, Seidelman’s academic research has focused on international trade issues, higher education innovation, for-profit education and competency-based education.

The election of Trump marked the end of Neoliberalism as the dominant hegemonic bloc of our time. The policies of Neoliberalism fostered globalization and technology change leading to structural adjustments with two distinct outcomes. First, they increase economic efficiency by reallocating resources to more efficient/cost effective sectors of the economy where employment, wages and profits increase – the winning sector. Second, other sectors face structural dislocations caused by globalization and technology-induced obsolescence which reduces employment, wages and profits that reduced employment, wages and profits – making this the losing sector.  Neoliberalism failed to address the unequal impacts of these adjustments and ignored the disadvantaged (unskilled labor, small and rural communities, and low-tech manufacturing decimated by deindustrialization.

Little or no effort by the winners to recognize and compensate the losers evoked a populist response with two distinct versions: Progressive Populism (Sanders and Warren) and Reactionary Populism (Trump). Trump promised to reestablish low-tech manufacturing, reverse the social movements agenda, and attack any elites or institutions that support free trade, open borders, government regulation or fiscal responsibility. Clinton’s defeat in 2016, signaled a populist countermovement strong enough to unseat Neoliberalism as the dominant hegemonic bloc.

The strength of American institutions, the 2018 midterm elections, and the remnants of Neoliberalism have constrained the rise of Trump’s Reactionary Populism as a new hegemonic bloc.  But none of the three blocs (Neoliberalism and Progressive and Reactionary Populism) are strong enough to establish a new hegemonic bloc. Without a secure hegemony, we face an unstable interregnum with no guiding, unifying economic and political philosophy to guide the future of the world economy. As Antonio Gramsci noted, “the old is dying and the new cannot be born.”