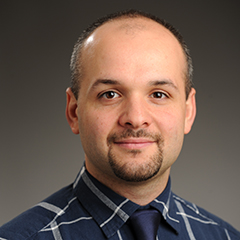 Another form of alternative meat might be on the horizon.

Garrett Broad, assistant professor in the department of communication and media studies at Fordham University, looks into its origins.

Garrett M. Broad is an Assistant Professor in the Department of Communication and Media Studies at Fordham University in New York City. His research investigates the role of storytelling and communication technology in promoting networked movements for social justice. Much of his work focuses on local and global food systems, as he explores how food can best contribute to improved neighborhood health, environmental sustainability, and the rights and welfare of animals. An engaged scholar, Professor Broad produces theoretical and empirical work for academic audiences, develops collaborative research projects with community-based organizations, and strives for teaching excellence in the classroom and across digital spaces.

Visit his Academia.edu page for copies of published work, samples of course syllabi, and his full CV.

It seems like a simple and obvious question. Meat is food that comes from the flesh of a butchered animal.

But what if we changed the definition of meat? What if we could have meat without having to raise and kill animals at all?

That’s the mission of a growing number of alternative protein advocates who envision a future world of abundant meat without animal slaughter.

The industrial production of animals for food has caused a number of big problems, they insist – it contributes to climate change, wastes resources, is bad for public health, and causes suffering to animals.

But ethical arguments to turn the world vegan haven’t worked. Instead, alternative protein advocates look to food technology to transform how the world eats.

Some hope to do this by creating meat directly from plants. Maybe you’ve tried an Impossible Burger or products from Beyond Meat. They use plants like soy and pea protein as raw materials, then apply food and flavor science to create vegan meat products with the taste and texture of the real thing.

But some people don’t think those plant-based meats are real enough. That’s where cellular agriculture comes in. Here, the idea is to take actual cells from living animals, grow them in a bioreactor, and produce a piece of meat that has the same mix of proteins, amino acids and enzymes as the original. They call it cell-based, cultured, lab-grown, or clean meat. Companies like  Memphis Meats, JUST and Finless Foods have shown the tech is possible, but it’s still a long way from your grocery store. One day, though, they say you could eat a chicken nugget made from the cells of a chicken that is alive and well, running around in your backyard.

So, what is meat? Maybe that’s a more complex question than you thought.