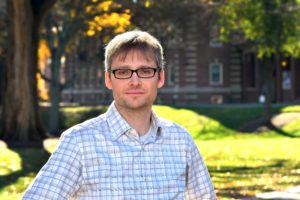 On Wheaton College Week: Are farmers markets achieving their goals?

Justin Schupp, assistant professor of sociology, looks into whether they are getting healthy food to those who need it.

Professor Schupp looks at the intersection of social movements and inequality to examine how social movements influence, mitigate and perpetuate each other. His current focus is on the local food movement and the impact of farmer’s markets. His writings on the subject include the forthcoming journal article, “Wish You Were Here? Do Farmers’ Markets Contribute to Better Food Access in Food Deserts? An Examination of the United States.” Professor Schupp graduated from Colorado State University with a bachelor’s degree in sociology and earned his Ph.D. from The Ohio State University.

Participation in the local food movement has grown dramatically in the United States, with the farmers’ market being one of its most widespread and heavily promoted forums. Proponents argue that farmers’ markets not only support local food systems but also strengthen community and make healthy food available to people who might otherwise not have access to it.

My analysis of nearly 6,000 farmers’ markets across the U.S. found that, at present, the reality of the movement falls short of many of its promises towards improving access to healthy food, but it also found that there some causes for optimism.

For the past several years, I’ve been studying farmer’s markets—where they are located, how they operate, and who they serve. As you might expect, mapping the location of farmer’s markets and analyzing the characteristics of neighborhoods that host markets revealed that most are in spaces with higher than average socio-economic characteristics, higher than average white residents, and overwhelmingly in urban areas.

But the data contained surprises, too. For example, though overwhelmingly located in well to do areas, when compared to surrounding neighborhoods, market areas were more likely to have residents who were doing poorly economically. The use of public assistance programs was significantly higher in neighborhoods with farmer’s markets, too.  Lastly, in some areas of the country, a significant portion of markets were located in neighborhoods made up of residents who are exclusively racial and ethnic minorities.

Based on the data, farmers and farmers markets could be moving closer to addressing some issues of food access, however, work still remains.  Continued experimentation, such as re-thinking the types of produce and products sold, involving interested communities in market development, and increasing food assistance credits to be used for purchasing food at the markets, could be ways to promote more inclusive market sessions. Such strategies may help farmers markets broaden their reach to underserved populations.