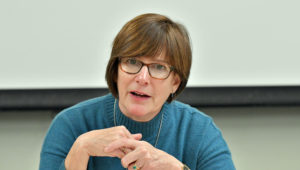 On Wheaton College Week: If you want to change someone’s mind, talk about the cause of the problem.

Professor Sahar is a social psychologist who studies people’s reactions to controversial social issues, such as poverty, abortion, and terrorism. More specifically, her research focuses on the links between political ideology, perceptions of the causes of social problems, and emotions and attitudes toward those problems. “I am fascinated by the ways in which individual worldviews and culture shape political opinions,” she said. Professor Sahar earned her bachelor’s degree at the University of Southern California and her Ph.D. at the University of California at Los Angeles.

Questions about the cause of events, from the 9/11 attacks to mass shootings, dominate the media as well as every day conversations. The way that we answer those questions matters greatly. Research in social psychology outlines the process we use when we try to identify the causes of events and the far-reaching consequences for our emotions, our actions, and our attitudes.

Most current discourse on political differences focuses on the role of ideology, such as the so-called “Red-Blue” divide. But these analyses ignore the cognitive-emotional process that connects a worldview, such as a political ideology, to opinions on controversial issues. Specifically, ideological leaning influences how one views the cause of a particular social problem and thereby who is responsible or to blame for it. These judgments ultimately influence public policy.

Take, for example, income inequality. Progressives tend to view the political system, not the individual, as responsible for a person’s economic status. Liberals therefore experience sympathy and support policies such as welfare. Alternatively, conservatives tend to endorse causes, such as laziness, that hold the individual responsible. They experience anger rather than sympathy, and wish to withhold assistance.

The current emphasis on ideological differences ignores commonalities in the way people view issues. Evidence shows that blame influences the attitudes of liberals and conservatives alike. Even liberals are hesitant to help individuals who are perceived as to blame for their situation.

This fact suggests a way to bridge the divide separating different ideological camps: focus on the causes of the problems we face. It is much easier to find common ground in regard to the causes of a social problem than it is to, for example, transform a conservative into a liberal. No matter whom you seek to reach—politicians, activists or fellow dinner party guests—talking about the cause of a problem is likely to be more effective than challenging a whole belief system.