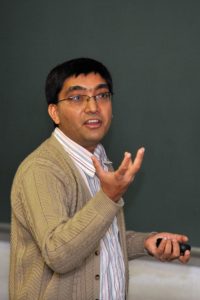 On Wheaton College Week: If you want to get involved in science, look to astronomy.

Professor Maitra primary area of research focuses on accretion inflows and outflows near compact astrophysical sources, such as black holes and neutron stars. His work attempts to shed light on the physical processes that lead to complex instabilities in these accretion flows, one of the most challenging and exciting fields in high-energy astrophysics. Before his appointment to Wheaton’s faculty in 2013, Professor Maitra held research posts at the University of Michigan and the University of Amsterdam. He earned a bachelor’s degree from Presidency College in Kolkata, India, a master’s degree in physics from the Indian Institute of Technology in Kanpur, India, and a Ph.D. in astronomy from Yale University.

In astronomy, certain names loom large: Keck, Hubble, Chandra. These and other massive instruments are pushing back the boundaries of what we can observe and learn about the universe. Access to such advanced equipment to gather data that would be unattainable any other way.

But modest equipment and amateur astronomers also play an important role in advancing science. For example, students in my observational astronomy course recently responded to a request to observe flares of light being emitted from a supermassive black hole. The students’ observations, along with those of astronomers around the globe, ultimately helped document the event.

On another occasion, one of my students and I observed violent activity from a black hole binary system using a relatively small telescope in the college observatory. We spent two nights recording the event. Afterward, a thorough analysis indicated that the light we observed most likely originated from matter moving away from the black hole at speeds close to the speed of light. It was an extremely unusual occurrence and it yielded valuable data.

Events like these—which are not uncommon—illustrate the importance of scientific efforts that take place outside the major research installations. First, big observatories are frequently unable to respond rapidly to every new phenomenon that comes into view. They create their observation schedules months in advance and they reserve just a fraction of time to explore unpredictable events. Second, when we are able to involve students and knowledgeable amateurs in research, it can help to broaden public understanding about science. In an age when empirical findings are often greeted with disbelief, this type of outreach is critical.