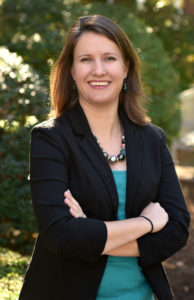 The headscarf worn by some Muslim women is becoming a tool of civic engagement.

Aubrey Westfall, assistant professor of political science at Wheaton College, explains why wearing a religious symbol freely is an important step in self-expression.

Professor Westfall studies minority politics and human rights, particularly as it applies to the politics of migration, women, cosmopolitanism and religious minorities in Europe and the United States. She is a primary author of The Politics of the Headscarf in the United States (2018), which investigates the social and political effects of the practice of Muslim-American women wearing the headscarf (hijab) in a non-Muslim state. She is currently investigating the politics of immigration in Scotland and Scottish views on the United Kingdom’s Brexit movement. Professor Westfall earned a bachelor’s degree from Westmont College and her master’s degree and Ph.D. in comparative politics from the University of Colorado.

The Politics of the Headscarf

The experiences of those interviewed–most of whom were U.S. citizens–often ran counter to popular misconceptions. For example, while there’s a common assumption among some Americans that Muslim women are forced to wear the headscarf by the males in their family, an overwhelming number of respondents revealed that they chose to do so as an expression of personal and collective religious and cultural identity and an exercise of their civil liberties.

The headscarf–a religious symbol—is increasingly becoming a self-styled tool of civil engagement. It is viewed by many wearers as a means to claim their “Americanness” and religious freedom.

These women embody a contradiction. They experience a sense of precarious membership in American social and political identity, while simultaneously enjoying full legal protection for their religious practice.

The discussions provided a better understanding of the sense of citizenship and belonging among these women—and how they are engaging in citizenship in the United States. It also shed some light on the role of mosques and religious communities in promoting positive political engagement.

Our conversations also revealed troubling experiences of frequent discrimination and even occasional violence. Despite this hostility, the degree to which these women are engaging in productive citizenship in their mosques and communities is significant.