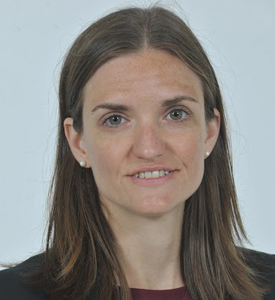 On University of Dayton Week: The nose may help us understand more about schizophrenia.

Julie Walsh-Messinger, assistant professor of psychology at the University of Dayton, tells us more.

Julie Walsh-Messinger is an assistant professor of psychology at the University of Dayton and a Licensed Psychologist in Ohio and New York. Her research broadly focuses on the neural processing of emotion in serious and persistent mental illness, behavioral correlates of emotion dysfunction, and relations between olfactory dysfunction, psychopathology, and personality. Dr. Walsh-Messinger received her Ph.D. in clinical psychology from Long Island University. She completed her predoctoral internship in adult clinical psychology at Massachusetts General Hospital and Harvard Medical School, followed by a postdoctoral fellowship in mental illness research and treatment at James Peters VA Medical Center and the Icahn School of Medicine at Mount Sinai.

Schizophrenia is a serious and persistent mental illness marked by hallucinations, delusions, and disorganization, along with deficits in emotion, motivation, and social function.

Scents are important to schizophrenia research because the disease is known to affect the ability to name odors.

The neural structures that process odor are directly linked to our “emotion brain.” This is why smelling an apple pie evokes a much stronger visceral reaction than just looking at the pie, and increases the chance you’ll have a piece. Because of this overlap, the sense of smell provides a unique window into neural emotional processing.

In another study, we asked participants to view pictures of eyes and to identify the intention or emotion portrayed in each eye pair. We then looked at how much the ability to name odors, as a proxy of emotion processing, and intelligence contributed to accurate intention or emotion identification. Again, there were reversed sex differences. In healthy women and men with schizophrenia, higher intelligence contributed the most; whereas emotional processes were most important in healthy men and women with schizophrenia.