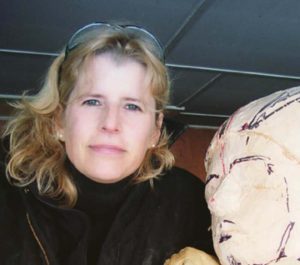 On Hartwick College Week: Why is one piece of art “better” than another?

Steff Rocknak, professor of philosophy, discusses how a human touch could make the difference.

Dr. Steff Rocknak is Chair and Professor of Philosophy at Hartwick College. She received her Ph.D. in Philosophy from Boston University in 1998. She specializes in David Hume and the philosophy of art. Her work has appeared in a number of journals and books, including Brain and Mind, Hume Studies, The Journal of Scottish Philosophy and The Humean Mind. Her book, Imagined Causes: Hume’s Conception of Objects, was published with Springer; The New Synthese Historical Library in 2013. She has given over 50 national and international talks on her work in philosophy and has served as a reviewer for multiple academic journals and conferences.

Dr. Rocknak is also Hartwick’s director of the Cognitive Science Program and a professional sculptor. She has won numerous prizes for her art work, including an Alex J. Ettl Grant from the National Sculpture Society in 2018. In 2014, she won an international competition sponsored by The Edgar Allan Poe Foundation of Boston. Her vision of Poe, which reflects his “conflicted relationship with the city,” now stands as a 5’8,” 1,000-pound bronze sculpture in the city’s Back Bay neighborhood. Her work has also been featured in multiple publications, including The New York Times, The Boston Globe and The Huffington Post.

The Cult of the New

Artists often embrace the new for the sake of the new—and for the sake of nothing else. The new, somehow, has been divorced from the better.  This divorce might be, in part, a symptom of postmodernism, namely the conviction that all we have is “the new” because there is nothing else, particularly, there is no truth, therefore there are no real standards. Thus, nothing is “better” than anything else; it’s much easier to spot what’s different.

But different is not good enough. In some cases, it’s not even good. In the Theaetetus, Socrates asks Protagoras – in so many words – “How can you claim ‘it is true that there is no truth?’ If this claim is true, you have refuted your claim that there is no truth. If it is false, you are no longer a Protagorian relativist.” The incoherence of Protagoras’s position should be enough to compel us to look for the truth, or, at least, a notion of “better.”

But how can we identify “better” art, apart from its newness, or originality? By determining how honestly it captures the human condition—regardless if the artist expresses himself in, say, an abstract or traditional manner. The term “human condition” pertains to those qualities that obtain of most human beings, regardless of gender, race, time period, etc. For instance, almost all of us think about death, fall in love, get betrayed, grow older, and so on.

Thus, the artist must show us what it means to be human, not what is new. Of course, she might do this in a new or original way, but this is not what is most important. This is why so many of us can genuinely relate to works of art that were completed hundreds or even thousands of years ago; the message is perennial.